The Flies of October 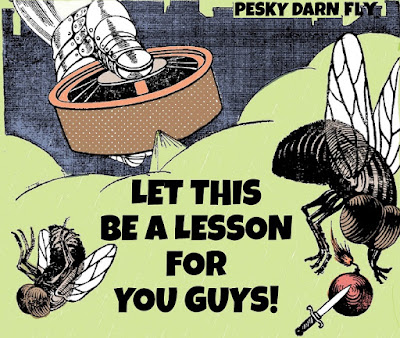 What motivates flies? I don’t know. Probably the same thing that motivates us. You put one wing in front of the other and go about your day. We (flies and us) are not doing impossible things, just the things that come naturally, or through nurture, in our case.

I've had a terrible time with flies in October. Totally different than September. In September they were merely bad, but in October they became intolerable. At the time I was thinking, “WTF’s going on?” Then it dawned on me, it's because winter's coming. The flies were frantic, in a frenzy, making it a zoo here in The Big City, my temporary quarters till they get Grandma’s house refurbished, fixed, and satisfactorily fumigated, if possible.

I should mention I’m a small town boy, only used to small town flies. So my problem in October could've been these being Big City flies. With a rougher background, hence they really know how to carry on. Suffice to say, it's been rough to just keep the flies at normal hazard levels without driving me completely out of my mind. I finally settled on a two-pronged approach to killing them, the fly swatter, mostly, with a minor assist from flypaper strips.

I remember the very worst day. I literally killed 75 flies that day, or more. I even quit picking them up after a while, they were so thick. Proper burials were out. I could do no more than warehouse them, you know, with a resolution to bury them properly in the spring, if I remember to do so. I was complaining to the neighbor guy, “The flies in The Big City are nothing like back home!” Then I started telling him about fumigating my grandparents’ old house. And it looked like I nauseated him when I said I still had the bed my mother was conceived on.

The neighbor now gone, I was back to killing flies. I’ll never forget that day! My arm was sore from all the swatting. They were dropping like ... themselves. Then in the evening I made a special trip to buy fly paper strips. I was very desperate; this was a level of desperation I hadn’t experienced since the time I peed my pants in fourth grade and had to go home and face my dad, also pissed off.

But wouldn’t you know, the frenzy turned out to be because it was the last day for flies! I had no idea. The next day came and there were barely any flies left. But now I had the flypaper strips up, and they’re still up. But one managed only to attract 10 or 12 flies. And the other strip attracted zero! None. This is a fact. At first I was blaming the brand of flypaper, then I realized the flies, with the colder temperatures, had either died or gone into dormancy, just like that. Nature’s pattern: Frenzy precedes dormancy. Like your sex drive when you turn 65. Of which, the less said the better.

OK, I’ve flashed back to these memories of flies because today, suddenly, I saw my first fly in a week. And wondered, “What the hell, I thought you guys were dead or dormant...” So I had to find the fly swatter all over again and get him. It pays to stay dormant, little buddy. Lesson for flies: Hibernate or die!
Posted by dbkundalini at 2:05 PM