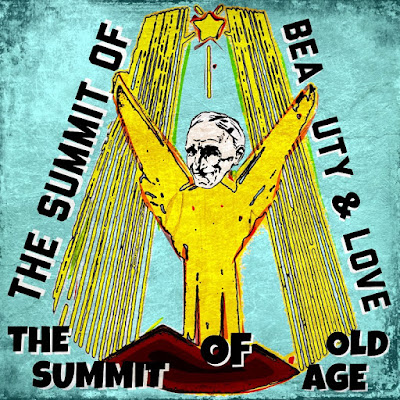 If I hadn't lived so long and become so old, I never would've believed it. I never knew there was a great shift in consciousness when you reach a certain age. I probably should've known. When you turn 13, you're immediately horny; that you can't deny. When you're 30, your boyish good looks are gone. When you're 40, you yearn for one last go-round, just don't name it after me. When you're 55, you pray you'll see another 30 years. But when you're 65, any minute now would be just as good. Suddenly longevity is nothing but more of the same. Even if you're cheerful like me.

Now, alas, when I see on Facebook that someone's father or grandpa "received his angel wings," I run to the mirror and check my back. Are there at least nubbies? It could be that angel wings are like pubic hair, one day they just puff into place. The thought that I'll soon get my angel wings has become an emotional thing for me, like when I got my first car. It was a beautiful, emotional thing; I even named it; I couldn't wait to show it to everyone. But getting your angel wings, that's nothing your friends and family celebrate. "Get your damned angel wings outta here and don't come back!"

Friends, I'm pleading with those of you smart enough to listen, Don't grow old. Antiques are fun, being an antique isn’t. The young try to force you to get a facelift, have your chin tucked, anything to perpetuate their persistent denial of life's course, taking away your joy and destiny. Which, if it involves visions of loving arms reaching out to me and celestial choirs and lucid dreams of the Great Beyond, the Rainbow Bridge, the Endless Horizon, and Angel Food Cake, has to be good.

You might remember that I got a message from My Friend Death himself, that I will live till 85. That happened a few years ago and I was very relieved. But now I'm thinking that might just be a thing Death says to placate you when you're between 55 and 60. You have an optimistic outlook while the Guardians of Time cycle around till you're around 65, then drop it on you that 85 might be a curse. And I'm not even in that bad of shape. I don't usually think it'd be a curse, but who knows... There are definitely shifts in consciousness over time.

OK, the Summit of Old Age. Looked at from a strictly evolutionary point of view, we old people become more and more superfluous the longer we live. Yes, I can see the point in keeping us around. If for no other reason than to keep younger people more content. Because they could experience terrible societal anxiety with all the attendant downsides, if they knew old people were hogtied and frogmarched to their death at a particular age. They’d quickly imagine their own fate, always sooner than you think, and pretty soon they’d revolt.*

Look at it like this: If older people were marched to their death, that still leaves survivors who are older than other survivors. But soon and very soon the oldest people left would be eight or nine years old, with five-year-olds gunning for them. Shortsighted, yes, because who’ll look out for the five-year-olds when the three-year-olds come for them? Along with this killer truth, you have to be a certain age before you can even sire or bear children, around 12; soon there’d be no one to kill the three-year-olds, with birth levels at zero or below zero. The last generation of three-year-olds would suddenly drop dead, miserable. Suffering a shortage of diapers and rattles.

As for me today, I somehow escaped every threat of generational slaughter, and here I am, a very old man, devastated in other ways. I outlived my house, for one thing. It became so full of fungus, dry rot, wet rot, walls alive with shortsighted bacteria, water feeding the mold, which then foolishly ate its way to its own oblivion. Plus, I needed new shingles, but was shortsighted, preferring to spend my money on online TV services. The beauty of my folly is this, the movies I purchased are still mine, but they’re online at various sites and will be mine forever, although I don’t know about survivor rights. Least of my worries perhaps. Should've bought shingles and had the place fumigated.

Angel wings, get me outta here!