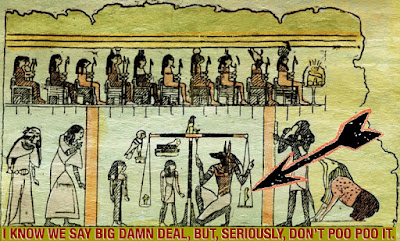 See the scales?
On the left is your heart and the feather of Maat on the right.

Let me start by wishing everyone the Happiest and Healthiest Feather of Maat New Years Day! It's my sincere hope that everything about you, from the least little indiscretion to the very worst sins of your life, are steadily balanced out with the feather of Maat. Because that's the thing; you don't want any of your nastiness to be heavier, because ... [throat-cutting gesture].

Isn’t that the greatest wish, for your life to be balanced? Because right off, we’re dealing with judgment, getting it out of the way, trusting that Maat and her feather will save the day, then the week, and finally the whole year. Then at the end of the year, when someone wishes you a regular Happy New Year you can say, “What? Nothing’s been the slightest bit bad for me till now, and I imagine next year will be great, too, thanks to the feather of Maat!”

Oh yes, this is a life giving wish. A friend turned me on to the whole feather of Maat philosophy, and you might say I didn't take it seriously at first. But I've found that paying attention to things is key to transforming your life. Even if your goal is to be the world’s worst ogre, you have to pay attention to it; it doesn't just happen. And it goes for good things too.

So this friend — we'd been discussing the nature of applying world teachings in a practical way, then he applied it to himself so diligently he went crazy and died. Because when you step into the craziness, you’re caught in it, and that's a heavy bag. But you're not him, so please don't despair quite yet. Because when you’re in the worst thicket of craziness, close to tearing your hair out, a clearing also appears, and, if you see it, sunbeams stream down, the sky takes on a hazy shade of heavenly, and your life is new! This is true and good. I’ve been through it a few times, and though I'm falling apart bit by bit, I'm generally OK.

Back to this Maat thing, I heard of it, immediately saw its value, applied it to myself, and by the usual weird quirks of grace, the job was done, the mission complete. And it helped that I had already heard enough in passing about Maat’s feather that I was able quickly to extrapolate from the beginning to the end. And now I’m telling you, just me and the feather, and you...

So what's it all about? To get the whole story, contact an ancient Egyptian priest or priestess. Because what do I know? I immediately staked out my own little place and gave it my personal spin. As far as I'm concerned, the feather of Maat is license to live your life as graciously and coolly as you choose. I think that if you're convinced about the feather, that it's the same weight or only slightly heavier than your karma, it's so.

Does that mean you will never get a different verdict? Well, never say never. I only like to look on the bright side of things, but naturally it's something to consider. There's some disconcerting things about it. Which is, if you screw up too much, a dog called Anubis eats your heart. But I don't know how literally things like that should be taken. Taken in its more literal sense, you'll have a vicious mythological dog eating your heart, and when it's gone, it's gone. But it could also be, 1) An idle threat to make you more careful; or, 2) An occasional headache or pimple. But remember, my friend went crazy and died.

In my opinion, though, sincerity counts for a lot, and attention. So you basically need to be sure yourself how good you are. Maat probably takes your word for it, and that's true or false depending... Is my outlook convincing to me? If yes, then I guess it is! So I'd just go whole hog, or something just less than that. And stay home if I got a zit or went crazy.

Now, just to get you started: Keep your own behavior as far below the weight of the feather as you can and you’ll likely be fine. But how do you determine the weight differential? There's some guesswork to it. But who else could know? It has to be you alone, and Maat. And Maat is sort of like your mom, or another force of good, saying, “Yeah, yeah, you’re OK, keep up the good work!” Or, "No, no, stop it now. Danger, danger, you're zapped!" Don't blame me, get a time machine, go back to ancient Egypt.

Happy Feather of Maat New Year!
Posted by dbkundalini at 8:02 AM