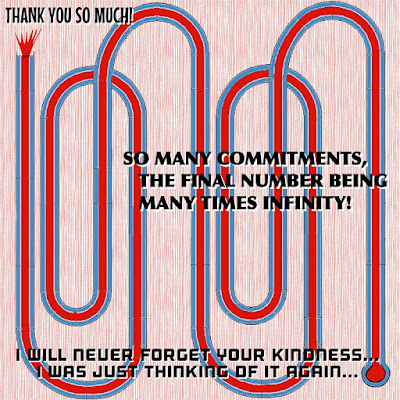 That’s it, friends. It’s been a complete joyride and now I’m seeing great success! Miles and miles of happiness and wonderful contentment stretched out toward the great beyond as far as I can see, certainly farther than I could ever reach! If you laid it out end to end, the ends would be so incredibly far away that one end wouldn't know the other.

But it was slow going much of the time, a challenging slog, but highly satisfying. I was so happy I considered shock treatment. The main thermometer was tested often to make sure it was connected and registering. For a while I saw very little stirring, barely anything, and was forced to hit my head against a tree to regain my patience. Friends told me to go about my business and let the fruit be seen in its time. Well, my hopes were a lot shakier than what the final result turned out to be!

I say the “final result,” but the final result is changing all the time. All the continents of the world are reporting jumbo numbers that are enormous, with village captains, associates and advocates in the major cities awestruck. An entire global “small town brigade” is still bringing in the numbers from the hardest places to reach. We’ve used telephone for much of it, email for a larger portion of the load, and even smoke signals for some of the toughest to reach places, along with pack mules, messages in bottles thrown in random bays and rivers, you name it. The last returns might not be tallied in this lifetime.

I still can’t quite believe that someone with my poor organizational skills and a terrible lack of leadership all through my life, could take on such a task and see it amount to anything. Seriously, I’ve never been able to conjure beans in the past. But now with the Men’s Division, and the Ladies Aid, and coordinated teamwork spanning every land mass and wet spot known on earth (including an ocean division), this amazing work was done. Or is still in process.

As for the thermometers, most of them literally blew up. If we ever do it again, we must invest in the thicker glass models. Mercury, this red substance, this flowing sticky nasty liquid is all over the walls! There’s a concern about the fumes, but we've heard that it won't hurt you much if you don't touch or breathe it; a safety zone of miles between you and it is recommended, but I haven't got that luxury. So we’re just avoiding getting any closer to the walls than we have to be. I've been fidgeting my zipper with a stick when I go to the bathroom. I can't see any reason to reach every living soul on earth and not live to tell it.

I’d like to recognize a guy named Kenny, a point of personal privilege. Kenny's out there. He knows who he is. He hand-delivered the first crate of thermometers as well as the last. And he never complained, not once, when no one tipped him. This is your tip, Kenny, our hats off... Even now I'm mailing you a free zipper stick.

I probably should also thank the entire globe for your willingness to be moved en masse. I know each of you is a beautiful individual, created in a spectacular way to be you and you alone. But once you’ve joined with everyone else, it looks like you’re one huge amalgam of people. I hope that’s accurate. Thank you, dear individuals. And thank you as well all you in the aggregate, as you are one beautiful slithering mass. The idea that each of you has thoughts and individuality just like me, and yet is this teeming huge thing blows my mind. Stay as sweet as you are.

I can’t possibly thank everyone by name. The men, the Ladies Aid. I mentioned Kenny. And so many others. I’m overwhelmed. I know you’re with me. And, yes, to answer your main concern, I will sleep when I get tired! Don’t worry about me, I’m about to take a long rest. Cover up and forget it for a while. Thumbs up to the folks passing my window at this very second. Just pointing at them, telling them, “No, no, you're the one that's great!” You’re all so great, and I’ll never forget it.
Posted by dbkundalini at 5:16 AM