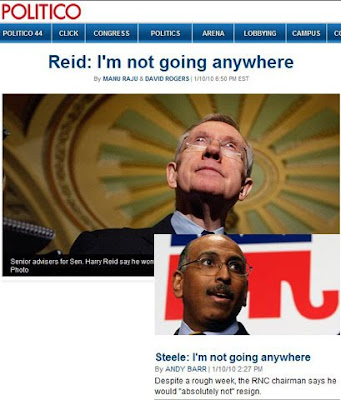 Neither of these guys is going anywhere, so can we just move on. Unless we also don't want to go anywhere, in which case we won't move on.

Each one of them had a rough week. I haven't been keeping track. But it appears that Harry Reid made an offensive racial comment about President Obama in 2008. In 2008! So they (the Republican hypocrites) say he should resign now.

Then Michael Steele isn't exactly beloved by the vultures of the Republican party, so they want him to resign, just because he's said a bunch of kind of nutty stuff. They should shut up. That just proves he's one of them!

Good for them! The idea in this country that just because you occasionally say something stupid that you ought to immediately resign is stupid itself. That wouldn't be a good use of our resources, our people. Because who hasn't said something stupid?

In fact, the very ones calling for these men's ouster probably would be caught short if we had the chance to examine everything they've ever said or done. Such morons.

Posted by dbkundalini at 6:54 PM