Tiny Came Back As A Toilet Brush 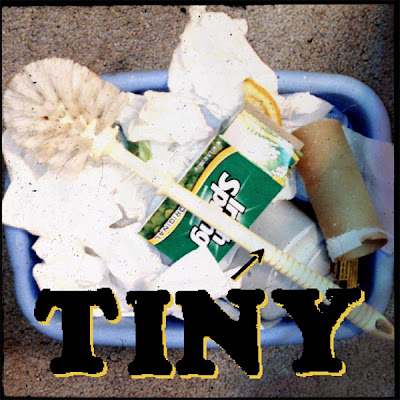 I'm crediting this post to the influence of an adult education class I took at the community college a few months ago. Otherwise, I doubt I would've ever thought of it. I actually wasn't thinking about it ... it came like one of those flashes; you know how the brain works, no rhyme or reason to anything.

The class wasn't any big deal, nothing special. Probably everyone's taken it at some point. Certainly it's common enough, your everyday garden variety class on "Past Lives -- Intuitive Evolution." But it was sort of fun, a pleasant enough way to waste some time in the winter months. I just didn't think much about it after.

The funny thing about the class was how often everyone came to the "discovery" that they were famous people in their past lives. I think we had three different William the Conquerors, out of about 25 people! A couple U.S. presidents were in attendance, and of course Einstein. The rest of us were a little more reserved. If we thought we were famous years ago, we kept it to ourselves. My own thoughts about me, I'm sure I was a peasant, and in my non-human lives I can remember being a mollusk. Seriously. I picked up a dried empty shell by the lake the other day and once upon a time I think I knew the guy.

Anyway, today the class came to my mind when I had to do some spot cleaning on the toilet -- you probably know what I mean -- and I felt some intuitive sensations in the handle of the brush. Sounds crazy, I know, but a flash came to me, which was from the "intuitive evolutionary" part of the class. The flash, then a dawning awareness, then an absolute certainty, was the freaky knowledge that my toilet brush is the present life-form incarnation of a guy I used to know in high school. He came back as a toilet brush! Believe me, I know how it sounds, but if it weren't true, why would I have thought of it?

I held the brush, trembling -- having used it first -- and this guy's image came into my mind as clear as anything. And it's not even a guy I knew that well. I don't even remember his real name, just his nickname, which was Tiny. He was one of those big guys who got the ironic name of Tiny. Like Big Tiny Little, the barroom, honky-tonk piano player who used to record for Decca Records.

And it makes a certain amount of sense, the whole thing of him now existing as my toilet brush, because Tiny was a scourge toward me. How fitting it is that his karma would be such that he would reincarnate and devolve to a basic non-living (it appears) household implement for me to use. And, please, before you write in, don't blame me ... he brought it on himself.

I hadn't actually even heard that he died, because like I said, I don't even remember his name ... it might have been Don, or Clint, or Kenny, something like that. No, there was a different guy named Kenny who hated my guts. I haven't run across Kenny's soul yet. He's probably still living. I'd Google him but I'd have to destroy my computer if I found him. He was another scourge, much worse.

He was a huge guy, so that probably had something to do with it. He used to accuse me of various things and ply me for information on masturbation. What I'm saying, I hope you realize, is 100% true. Beyond that, he insulted me in various ways, probably because I actually was small and his name of Tiny had something to do with him being such a behemoth. He definitely saw me as a victim ... which I obviously was. I didn't have the confidence -- or sufficient knowledge on projection and karma, etc.  -- to be able to tell him, "Yeah, but someday you'll be a toilet brush and I'll still be a man." If only I'd known!

So there I was, this morning, with Tiny in my hand! I thought, Oh my God! I've used him a hundred times and didn't know it was him! But today was so completely different. I had the intuitive flash. I realized it was him ... and my reaction was something like this: I felt weird about it, the terrible conditions Tiny's been living in all this time...

You know how it is with toilet brushes. They have a holder. You use it and stick it in the holder, which always has about a quarter inch of water from previous days. I look down at that holder every time and think I should clean it. But then I don't, because what's the use? ...  it's only going to get wet again. Plus, it'd mean having to touch it, then having to wash my hands for 20 minutes. Still, it's like a little cesspool of germs, down among the rest of the muck, the occasional pubic hair, etc., very disgusting. This is where a guy should have maid service.

OK, how do you think I treated the toilet brush once the flash came to me that it was Tiny back from the dead? Did I use him with malice? Did I put him through the paces? Did I slam him back into the holder with the water? No, I didn't do any of that. I used it as normal, then put it back in its place as normal. One, I don't want to break it and have to waste money for a new one; I might get someone I don't even know. But, two, I am a merciful person. Mercy is my Number One rule. If they ever build a monastery in my memory, mercy will be their basic thing.

At this point, I don't really have any living enmity toward Tiny. Even though he was older than me at the time, I think two grades ahead, he was still just a kid. He had to be around 18. His brain hadn't really entirely formed ... and I don't know that it ever did. He was a bully, yes, but maybe he had troubles at home. And as far as his own self image, being huge and being called Tiny, then whacking off and having to torture other kids out of his guilt, let's say, the whole projection thing, he had more problems than he knew what to do with.

So, no, I haven't got it in for Tiny. And as far as his return, his devolution, his reincarnation as a lowly toilet brush, I did not consciously have anything to do with that. How soul entities are reincarnated, divvied out, is clearly not my department.
Posted by dbkundalini at 3:52 PM