My Dreams of Open Carry 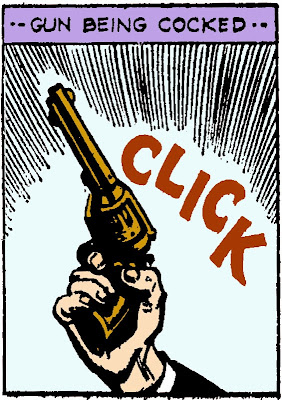 My dreams of open carry are coming true! And this is even one of those weird things I never thought would happen, like flying cars. I figured the Old West was gone and we'd never get it back.

This is true, that as a kid watching westerns, I always complained that they carried guns all the time and we couldn't. Our guns were hanging on a rack -- unlocked, mind you -- and we only took them down for hunting or cleaning or showing someone.

Parents didn't believe in safety as much then, which was OK, because we did all right. We had the run of the town. We played lots of war games, cowboys and indians, and killed each other all the time, only in our imagination. Even though we had guns, we never actually killed anyone. Although I remember having a grievance against the sheriff one time. All water under bridge...

I gave up all hope of open carry -- walking around with holsters, dangling guns down to your knees. Never thought I'd live to see it, but now... All praise and glory! They're back!

Frankly, I don't know how long it'll last. His term is only so long. Meaning, we need to groom future black presidents so we never have to go back to a ban. There's definite benefits to a generalized paranoia, which we're reaping now.

Only, I don't see any decent candidates being groomed. On the bright side, we might get a woman president for eight years. Of course that'd give our testosterone a workout, meaning open carry would be safe. Yet, it's all temporary. What we need is a constitutional amendment -- call it the Second Amendment Part B -- that presidents can only be black and/or women.

The worst case scenario for open carry is that we get another white man like Bush, especially like Bush. He had that whole ignorant good-old-boy thing going so strong there wasn't ever the slightest temptation to allow open carry. And the more dishonest he was -- we frankly didn't have time to plumb the depths -- the more people liked him. I still see various idiot assholes on Facebook pining for those supposedly "good old days" of a white male president, with absolutely no understanding of what it meant for open carry.

I personally haven't taken the gun plunge yet. The openness of open carry is still a little too primitive for my taste. If you kill someone you still have to account for it. I want it like the westerns. You do your killing, you have a drink and play cards undisputed. Or go upstairs to Diamond Lil's room and do whatever they did back then. Teach her a thing or two with your barrel.
Posted by dbkundalini at 7:33 AM