Joining Westboro for the Traveling 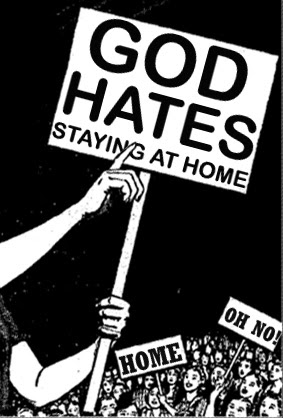 I got this idea as soon as I heard the Westboro Baptist Church was picketing the funeral of former Speaker of the House Tom Foley.

(My first thought was Tom Who?, since my brain doesn't work with the same efficiency that it did years ago. Then I scoured my memory banks and finally came up with a hint of recognition at the name.)

It was that -- exactly that -- the obscurity of Tom Foley, that made me think, Maybe I should join them and get in on all the traveling. I never do anything but stay home, while these people are all over the country and maybe abroad.

Plus, it'd be kind of fun, a growth experience. I normally treasure it when people like me. But everyone's become so selfish these days they don't really like anyone, just themselves. That leaves an insecure guy like me wondering What's wrong with me? Till I think a little more and come up with the answer: People hating you is really the same as people liking you; it's attention; they LIKE you while hating you because they're getting a kick out of your existence. Follow that? It's basic Psychology Today 101. Not only will people love me if I'm carrying a picket sign proclaiming God's hatred for them, but I'll be able to travel ... and love myself more!

So you can picture me at Westboro Central. We're scanning the papers, looking to see if any two-bit historical figures have died. Or someone's shot up a school. Or a hurricane's happened. Or the price of rice has gone up in Japan. Something! Anything! It's been two long weeks since I was a thousand miles from home! Ahh, here it is: TOM FOLEY IS DEAD! The less-intelligent members of WBC go, "Who?" But pretty soon we're all on the same page, with me casting the deciding vote: "Yes! We go to Washington, D.C.!" (We honestly ought to be protesting Lou Reed's funeral. He's a rock God, which the actual God has to hate.)

In Washington, since I'm at heart a very responsible person, I hold the protest sign, even if it's only for 30 seconds, then duck out to take in the historical sites, including the newest statue showing the Republicans not only shutting down the government but helping reopen the World War II memorial they closed for the PR. I check out all the great places, including Ford Theater, where God showed his hatred for the end of slavery by killing Abraham Lincoln.

Back in Topeka, a few weeks have gone by. A kid in Kansas City was expelled from school for a Jesus tattoo on his forehead. But I don't feel like traveling to Kansas City (big whoop!), so I vote no on that. And there's a few other close-by places. The governor's poll numbers are slightly down because God hates the price of tea in China, but if you live in Topeka obviously it's no fun to stay in Topeka, so we all vote no.

I suddenly come up with a good one. France! I've always wanted to go to Paris, so I photoshop a fake newspaper article, "Homosexual Man Discovered in Paris." Which is plausible; if they have them at the Vatican, you realistically could find one anywhere. Out with the signs! I've got a free trip to France! Where we search high and low and never find the guy. But to make it worthwhile, we march around the Eiffel Tower, hoping against hope that it might fall down, helping to make our case. Again, I only protest for about 30 seconds, then I'm off to eat at the French McDonald's and get coffee at the French Starbucks.
Posted by dbkundalini at 10:35 AM