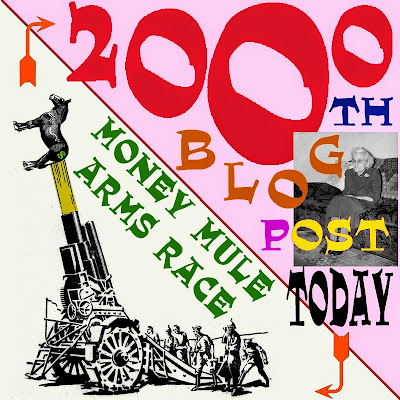 Note: I'm off to a slow start on this. Since it's my 2000th post, all of a sudden I'm worried about quality. How to begin? Just begin, stupid...

The last few days I've been worrying myself sick about money mules. It's a big deal because, frankly, I've been putting a lot of money into them. The idea's basically sound: Send money mules (people) out with money, stay at home myself, then let them bring back their earnings. I'd share with them some pittance and keep the rest myself.

The big problem -- it's a poison pill -- is none of them returns. They apparently think, "I've got $100,000 in my hot little hands, I'm footloose and fancy free, why should I return?" Which, I guess, I might also think were I in their position. The bastards!

Now, of course I'm not focused on any of this in a vacuum. There's plenty of others out there, now alerted to the money-making possibilities (and the development rights), jumping into the fray. And as far as I know, coming up with better techniques, ones that actually work.

That being the case, it leaves me more or less high and dry. Except for what a small-time local operator might make at the edges, two-bit stuff, while flying under the radar and keeping his activities lowkey. Similar to small taco places, that once surpassed in quality by the likes of Taco Bell, et. al., just can't compete. We spit out their crap food in a second and flock to the corporate counterpart.

Still, shouldn't a little guy, say, in the money mule business, flourish? It hasn't been proven that he shouldn't. But in any arms race there's going to be winners and losers. Those with the greatest resources have the upper hand.

The time to get busy, then, is now. Find a way to make money mules more trustworthy! There's no time to waste! Time is of the essence, ready or not! To delay is to lose! He who puts his hand to the plow ... something something something.

At this point I'm thinking my go-to strategy has to be to convey to the mules the sense that I like them, appreciate them, and trust them. Do what my mom did to me, with moderate success on her part. If I only can ... But you lose a million or so, as I have, and it does something to your confidence.

I have five money mules before me. I give each one $100,000, then immediately demand back $50,000. Then half of the remainder, then another half, etc., until they have almost nothing. Then repeat, and repeat time and time again. By evening they're exhausted but hopefully have learned a message.

The arms race is heating up. This much I know for a fact, the big guys have the best psychological teams at their disposal. Just like the Nazis. You have your hands around the throat of an entire nation, of course you can command resources. And what have I got? I'm one guy, no country, no Gestapo, no conglomerate, no company. I'm like the little taco guy, doing my best with diminishing resources. Peddling a little bike and throwing tacos out of the basket and hoping people pay, so to speak.

And yet I need it to work! I have no other option. The money I get from money mules today might very well fund my retirement tomorrow. Depending on how much I lose to them between now and then.... I'll either retire or keep working the system till I die.

2000: OK, that ought to hold everyone, while I express my thanks to myself for 2000 posts since this blog started. In addition to thanks, I'd like to recognize a deep inner beauty in myself that made this moment possible. Everyday, lately, I've sat in silence at the beginning of each morning, and have looked within. I've liked what I've seen, making, almost, two of me. Get that split? I should be up to 4000 by now!