Ruthie Gets Her Man 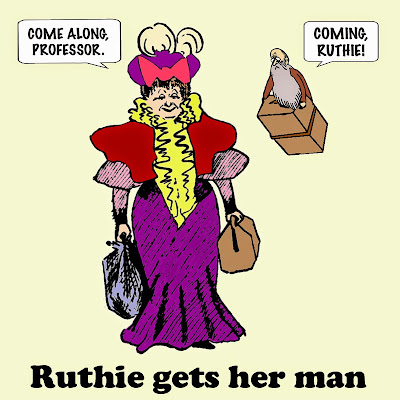 We have a love match! Old Professor Woolworth and our lovely student union cafeteria lady, Ruthie! With me the middle man, seeking to ensnare Woolworth and three other psychology profs in a compromising position. Little did I know it'd end in a whirlwind mutual seduction and wedding all the same day! For that, I can only thank my lucky stars above.

As it turned out, Woolworth had his eye on Ruthie for many years. But he always figured that his being a lowly psychology professor at the university meant he had no chance with someone at her level. She was always friendly to him, yes, but was she really? As a psych prof he looked for unspoken truths and ulterior motives, to the point he was completely mixed up on which was which. While all that time Ruthie was juicy fruit, ripe for the picking by the right man.

My part in this love story was not completely pure. I'm still trying to get to the bottom of the Money Mule question, Why do money mules always take the money and run, never returning? And I asked four professors to help in the study. But first, as always, I needed to find out if they had scholarship on their minds and not just sex. Enter Ruthie, exquisitely dolled up, a temptation for each.

Sure enough, when my back was turned (so they thought, for I had cameras in nearly every room), each professor failed the test. Professor Morningwood was up first, barely waiting for me to be out of sight. His reasoning was "The early bird gets the worm" He beamed as he got Ruthie alone. "We'll start early and make love throughout the long day!" But she was repulsed, knowing he'd only make hay while the sun shined, then desert her by nightfall.

Ruthie ran, but right into the waiting grasp of Professor Cherrywood. And "grasp" is the right word. Cherrywood is a hands-on kind of guy, always seeking out the sweetest fruit and seeing if it's ripe for the picking. With skill and dexterity, he had Ruthie against the wall, doing his full appraisal. "This is good," he thought, his grubby hands all over her: "Plump, ripe, juicy, with just the right hardness and flavor," before Ruthie had had quite enough and slapped him, leaving Cherrywood in the pits.

Next, Professor Deadwood lurked in the shadows down the hall. He knew he needed her, but he was worried, "What will I do with her if I get her?" Yet he couldn't resist, with her beauty and how exquisitely she was dolled up, and the bountifulness in her every move. So great! Something in the way she moved ... made Deadwood almost move. He was certain he felt a twitch -- could it be? ... his first stirring in years? Yes! He believed it was so. Meds hadn't worked, counseling, and manual rousing techniques had all failed, but now, with his professorial gown around his ankles and trusting the sensation of that surge of confidence, he made his move. Which -- DAMN! -- ended before it began, phantom arousal playing him false...

Watching these encounters on video, I could only shake my head. These men aren't the scholars I need ... They're lecherous! Nothing on their minds but sex! I strode back and forth in the control room, fuming, wondering what I could do now. How can the money mule question be answered if I have no help? It went on like that. I was absolutely lost in confusion, consumed by my own worries. It must have been 20 minutes of pacing and sweating, and I'd lost my focus. Then I suddenly realized, "Ruthie! Woolworth!" Rushing to the panel I pushed all the buttons. Where were they?!

I raced the halls, but hearing nothing could only imagine the worst. When I thought I heard ... yes, it is ... I heard what I can only call the very subtle whispers and cooing of cuddling and loving afterglow. I almost burst in but thought better of it. You sly dog! I thought to myself of Woolworth. You took her in complete sincerity and tenderness and now she's yours ... You are the man for the job! The job of understanding Money Mules. (As it turned out, maybe Ruthie took him.)

Long story short -- let's just say they took each other -- they were totally in love. Woolworth had more going on behind that beard than anyone gave him credit for. And Ruthie, though exquisitely dolled up, was a doll in reality. Neither one had thought they were good enough for the other, and that's what kept them apart. But being alone, apart from the high station of cashiers and low station of psych profs, they realized they were soul mates. I conducted the wedding ceremony. The others served as witnesses. And we would live happily ever after.

As a wedding gift, and payment in part for Money Mule research, I sent them forth with a big box stuffed with $300,000. Whether I'll ever see them again, that I doubt. You send someone out with that kind of money, they've never been known to return.
Posted by dbkundalini at 9:55 AM