A Thousand Years From Now 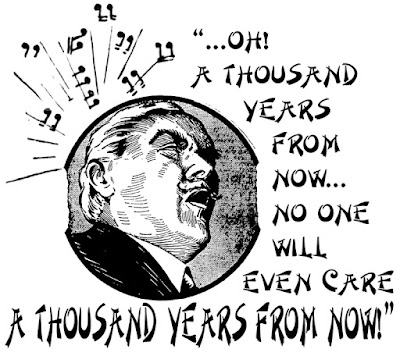 Here's a self-help exercise I thought of earlier tonight. Which has helped me put a few things into perspective, so now I'm not nearly as bummed out.

I was really feeling lethargic and even depressed. Everyone has "real lives," and in very short order they can become clogged up with various demands on you, this or that person holding something against you, criticizing you, and basically getting you in a corner. So every damned day seems like it's just dragging along. I'm still a bit depressed, but definitely not as much. Not as long as I'm daydreaming and singing about a thousand years from now!

This little song I started singing dirge-like to a very slow version of the tune of "You're In The Army Now." Thinking ... once again, of those glorious far-off days of a thousand years from now, when everything about me, everyone else, and every problem I either have or think I have will be so definitely forgotten ... it's basically ridiculous to even think about it now.

That's the basic gist of the thing, but I'm tossing in some riffing on the words, like "No one will even know my name," "No one will care and that is true," and "No one will give the faintest shit, a thousand years from now."

In addition to singing the song I'm thinking how true it is. A thousand years ago was 1016, OK? And I assume some guy like me, probably pounding out shoes for the horses of a village, was having some problems with others. Couldn't get the metal ... or his reputation had taken a hit; a horse crapped on him during a fitting and he shot it in the ass. Something harmless like that. Well, a thousand years has now passed, and we have no idea about that guy, who he was, who his friends were, what the horse's name was, whether the horse ever walked again, anything! A thousand years has passed and it's all completely forgotten.

Because a thousand years leaves zero witnesses. They've all moved on. A thousand years from now even Lee Harvey Oswald won't raise any immediate thoughts. But they'll speak his name and a computer will regurgitate something. But it's not going to be mentioning me ... with the relatively little reputation and problems I have. Even though they feel big to me right now. And even though I'm down in the mouth, going through the motions, all lethargic, yawning, etc. A thousand years from now heals everything.

It actually won't matter -- none of it -- 30 years from now. I'm sure it won't. I'm 63, and as we all know I'm going to die when I'm 85. That's only 22 years away! Meaning, in 30 years I'll already have been dead eight whole years. And I find it hard to believe anyone's going to still be complaining about me then. The average guy dies now and you're immediately forgotten after they've scattered the ashes.

You got a problem? Put it in a larger perspective. What difference will it make a thousand years from now? It won't make any difference at all.
Posted by dbkundalini at 9:52 PM