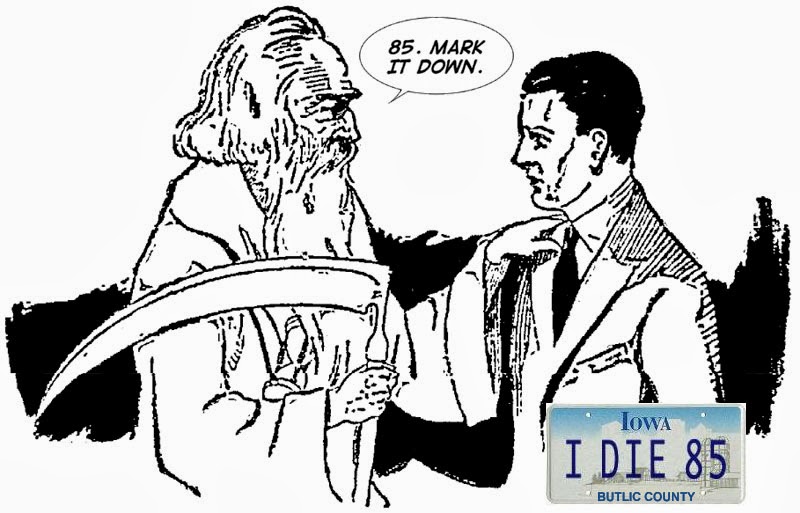 I've got great news! I don't die till I'm 85! Isn't that great? That means 24 more years of quality life right here on good old green Mother Earth. I can lay back and really enjoy myself now, without the day-to-day anxiety that shkitttt [throat-cutting phoneme].

And I actually have been very anxious, basically to the point of sweating through my jogging clothes, which I use for pajamas. Tossing and turning, sweating, staring at the ceiling, the physical pain's sometimes too much. I pray, calling out to the Logos field, then I remind myself that calling out isn't necessary, that its presence is in every cell. That's comforting, but, still, who wants to die? Not me.

Now, as you may recall, it just so happens that I have plenty of experience with Death as an entity, the force of death personified (see links below). I've been present when various ones have died. If interested, you can read about it. All that said, it's no big surprise that he appeared again, this time not in his usual black robe but in a white one, looking as kind as the Wizard of Oz in his human shyster form.

First, he thanked me for our friendship. I asked what he's been up to. He gave the throat-cutting phoneme, brevity being the heart of wit. Then we got down to business, my anxieties, with him asking if I really wanted to know. Finally, I nodded, adding, "I really really really really really really want to know..." At which point he said simply, "85. Mark it down." He touched my shoulder and imparted certain other knowledge without needing to speak. And with that he was gone.

"Oh boy! 85! Around 24 years of added life!" Because he didn't say it'd happen the day I turned 85. It could be the very last day of my 85th year! How about that! That's closer to 25 years! A whole quarter of a century! In joy, I sang the song "76 Trombones," knowing I have 9 more trombones than the title of the song, which is a ton of brass! The last time that much brass was in one place was when the Joint Chiefs told LBJ Vietnam was lost. Although it continued to burn.

OK, I said Death imparted to me certain other knowledge. In that were warnings, 1) that if I tried to commit suicide, the guarantee was off, and, 2) that foolhardy behavior such as playing on the interstate, deep-sea diving, and being a policeman in a tough metro area could be met by death. But "normal" foolhardy behavior, like eating wrong, not exercising enough, and quarrels at family reunions, would not be met by death, but could be met with physical/mental incapacitation. So if we get into it at a reunion next year I could be a vegetable for 23 years. Ouch. Reminder to Self: Leave weapons home.

Still, all this is OK; I can accept it. I'm not going to commit suicide. I'm not going to play on the interstate. I don't live anywhere near a sea. And I have no desire to be a cop. I will try my best to eat right. I hope to start exercising as soon as the spirit moves me. I'm going to do my best...

So 24 years left! Wow, that's great! No more anxiety. What shall I do first? You know what? 24 years is quite a while. I might lie in bed and read for a while. I'm a little drowsy. Then I've got the whole day before me!


Death Links:
Death -- I Now Pronounce You Dead
Out Drinking with Death
Death Goes to the Dentist with Me
Death -- When Your Number's Up
Walt's Suicide -- Death by Water
The Gaping Maw of Death (Woof! Woof!)
My Picnic With Death
The Chilling Hand of Death
Her Parachute Didn't Open
Posted by dbkundalini at 9:14 AM