I Could've Been A Gynecologist 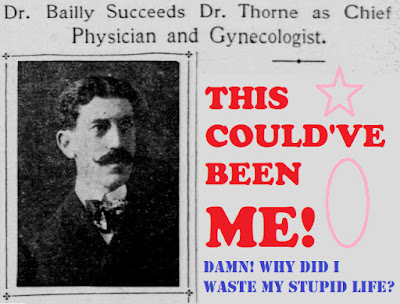 Sometimes I really rue the choices I made in life. No one was especially gung ho and on me about making career choices. Grandpa would see me doing some stupid thing, like letting crawdads clamp on to a leaf, then pick them up in midair and watch them dangle, and basically laugh himself sick. Then we'd go to bed and the day was shot. No one was in my face, going, "Whatcha gonna be? Gotta make a choice real soon. Or you'll be standing on street corners, a public disgrace."

After I grew up and now that I'm old, it seems I have all kinds of ability to look back and say, "What if?" What if I'd just applied myself toward one damned thing, then launched out on a career specializing in that thing, my name on the side of the building, the building getting progressively bigger as I added on offices and waiting rooms and lounges, with assistants and cohorts running around, ducking in and out, barely seen by patients, but working feverishly behind the scenes with excellent ethics?

The thing that popped into my head today, accompanied by the usual regrets, was I could've been a gynecologist. That would've been darned interesting. And a great conversation starter as I grew up, if only I had known about them back then, the need for them, the terminology to discuss it with, and so on. As it was, I barely knew there was a difference between boys and girls till I was about 7-8. Of course I knew there were moms and dads, I'm not going to say I was completely oblivious. But that's about it.

Then I grew up and saw an occasional something here and there, whatever. But I don't know if you know about girlie magazines in the '60s. They didn't show anything very much, not like they do now. You can search at archive.org for Adam magazines* and see what they were like. Breasts and bottoms, that's it. I remember conversations with other boys (cousins) to the effect of "Why don't they ever show [boy's terminology omitted]?" And the answer was always some variation of this: "I don't know, must be something wrong with them."

But what if, in spite of all that, I had had parents and grandparents who ran by me all kinds of interesting career choices that didn't involve gas stations and motel laundry? Such as, "How about this, Denny, a gynecologist!" Then they'd explain to me what a gynecologist is, etc., and I'm enthralled by the service I could perform, fully professional, fully educated, fully honorable and ethical, knowledgeable, personable, just an unbelievable kid with real ideals about gynecology.

Teachers would be all like, "What have we here? A future gynecologist?" The newspapers would come around to run an article about "Local Kid Excels At National Gynecological Fair." My parents would be passing out cigars, knowing Grandma and Mom and my Aunts and their Friends are going to have lifetime discounts, with a family member serving them, completely taking away all the embarrassment they might otherwise have experienced. But as it was, if they ever went to a gyno they never said anything about it to me.

But how cool would it have been? Very cool. I buzz through school. I get scholarships. I go through college, pre-med, intermediate med, the study of the human body, the reproductive system, the difference between boys and girls, the whole ball of wax. Then I hang my shingle out, Denny the Gynecologist. I get a reputation as stated above, ending up like redeemed Scrooge, the best gynecologist that old town had ever seen, or any old town had ever seen, in any old country that there ever was or could ever be.

I take on a staff, a receptionist (offering her discounts, him discounts if he's conventionally married, or discounts for their mothers if it's two men, etc.), associates, gofers. Then like the SimDoctor game, the patients start flowing in, getting their yearly checkups, monthlies as needed, and what-all I don't even know. I've never been to a gynecologist's office. Remember, this is all a fantasy of what could've been.

-------
*One of my cousins died approximately a week ago, in real life. He was five years older than I. Somehow his parents allowed him to have a stash of girlie magazines in his room. I guess they allowed him. They didn't seem to be hidden under the mattress. One of the main titles he had was Adam, which you indeed can find at archive.org. I always wished I had a stash of these myself. But when you look at them at archive.org, though, you'll notice, What piss-poor girlie magazines they had back then! Anyway, RIP to my cousin. We weren't extremely close, but got together once in a while as kids. I saw him at my mom's funeral a few years ago and he was very personable to me.
Posted by dbkundalini at 10:43 PM