Good Idea: A Butcher Knife to the Gut 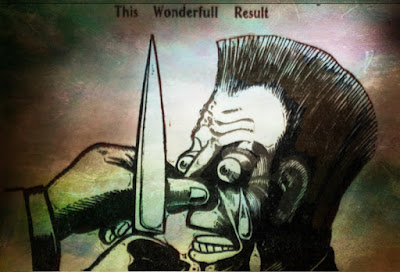 This is a thought piece on what a good idea is and whether you should act on it. Probably the key thing to most decisions is: Is it a good idea? Do I think it's a good idea? Is my thinking generally in line with what is socially accepted as yielding good ideas? (Not that I care all that much about social acceptance, but it's the same standard they use in deciding whether you go to prison or not.)

When we get done here, let me assure you, we will have a wonderful result, something vague enough that I can leave the decision up to you, thereby keeping me from complicity in any crimes you choose to commit based on what you read here about something being a good idea or not. To read further is to hold me free and harmless of complicity in any misuse of this teaching that you may be guilty of, now or in the future, world without end, Amen. Please keep reading, though, because maybe there'll be a mention of sex.

OK, there is an enemy you have. You've had it. You're fed up. You've reached your limit. You're at the breaking point. It's either him or me. Someone must die. What's this?! A butcher knife! An idea is born. I will take the butcher knife, you think, and (step-by-step thinking ensues) I will push the thing into his gut! No one will ever know! So the idea is hatched, the step-by-step thinking is through...

Here you are now with the butcher knife. Strop, strop, strop, sharpening it. There your enemy is! You creep up ... You see your opportunity ... You lift the knife ... There's a look of terror on his face ... When instead of going through with the stabbing, you drop the knife to the floor.

You retrieve the dreadful butcher knife. There's no need to strop it; it's still sharp enough. Your enemy comes into view again, somehow oblivious to the noise and commotion and indecisiveness just displayed. His previous look of terror must have been gas. You can thank your lucky stars you have this opportunity to carry through with it. What a horrible enemy he's been. Anyway, you're doing him a favor, in a sense, dispatching him to his heavenly reward a little sooner than he's expecting.

Again, you creep up. You lift that terrible blade of judgment. You're strong. You're decisive. You've made your peace with the world; the enemy has to die! When -- and this is a key point -- you think back to the good idea of just 5 minutes ago, the second idea, that you would not carry through with it. Thinking to yourself, echoing the earlier decision, If not killing him was a good idea 5 minutes ago, it's still a good idea now. Good ideas are sometimes like that, what can you do?

You go home and have wild sex, the knife now at the bottom of the North Skunk River.
Posted by dbkundalini at 11:52 AM