My Dogs In Heaven 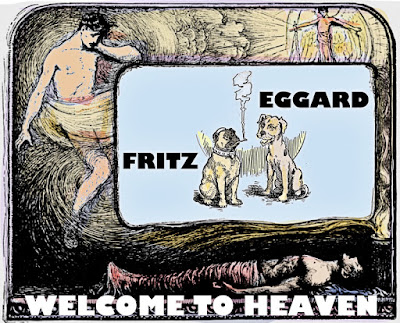 Every once in a while I like to publicly profess my love for dogs. You know how it goes, nothing softens your image and puts you in the good graces of others than your love for dogs and showing a soft spot for their cute antics.

Which I don't say cynically; it's just a side benefit deriving from My True Feelings about those great, human-like (without all the bad parts) creatures. Do I love every dog there is? I haven't met every dog and I know there are some that aren't great. There used to be a dog in my neighborhood named Sarge. He was so mean they sent him to Vietnam. He was tough to like, one of the reasons he went to war.

OK, as old as I'm getting, nearly 65(!), of course I'm thinking more and more about my future. Which is relatively limited in this life. I could do a whole thing just on that subject. I'm forever figuring up what percentage is left based on ideal factors. 100 is reasonable, but not likely. Some of my male forebears didn't do so well. Anyway, today I want to write about dogs AND the afterlife. In Heaven.

I enter the Glorious Gates, and my dogs from the years come walking in a group toward me, greeting me. I won't mention each one. Just one representative from my childhood and one from adulthood. From childhood is my first dog, Eggard. And from adulthood is Fritz. Eggard I had probably under three years, and Fritz died a week after I got him.

Here they come! Eggard I can barely remember what he looked like. His mom was a Collie and his dad was something else. Fritz had generally a German Shepherd look without being precisely a G.S. So here they come! Welcoming me to my heavenly home, eternal life. They're joyous as they watch the look of amazement on my face at all the beauty in that great place. I haven't seen anything this impressive since the home shows of the '60s, when they showed us the All Electric Homes of the Future!

I can barely take in the glory. I've been overwhelmed before, but this is the entire panoply of wonders. If you can picture the amazement and activity of the State Fair but it's made of glass and diamonds, you'll have a good idea of the beauty. But the true glory is to bend down and become reacquainted with Eggard. Eggard! What a great name for a great dog! "You were so little when Poohie had you! And look at you now!" Even though my memories are limited, they come flooding back in my mind's expansion.

Eggard knows it's me, even though of course I've grown. Was I too rough with him in life? I don't think so. I surely was gentle. I was very proud of his name, Eggard. My brother and I used to laugh. His dog's name was a plain old name, Rats. But mine had an elegant name, Eggard! What a pair of brothers we were. Then Rats ran away. And Eggard at some point died and I personally buried him by the fence. I can't drive by that old house without thinking of his grave somewhere down there.

Here comes another dog in glory, the already-mentioned Fritz. They say there's no tears in heaven, but I'm crying when I see Fritz. I was crying when we parted. I had gotten Fritz at a pound, a rescue place where they had unwanted dogs. And it turned out his health was bad. I had Fritz only a week, when he crawled under the back stairs and died. I brought him out and carried him across my arms to a grave, like a hero in an opera. I was crying like a baby.

In the years since Fritz, I've used his story lots of times to express my own philosophy that death ought to be like that. When you sense it's time for your death -- and with humans it'd mean you know in your core that this is it, say you had late stage cancer -- you simply crawl under something and die. It's admirable. Whether I could actually do it, that is the question.

Fritz jumps up on me (back in Heaven here), as if to say he also remembers that day. How do dogs say goodbye? With Fritz, it was like in the song, "I'm late, I'm late, for a very important date. No time to say hello, goodbye! I'm late." Such an admirable act at the end -- instinct is beautiful -- to crawl under the stairs and simply die! I've never gotten over the act of that. It impressed me beyond anything any other dog's ever done.

So we have a nice reunion in Glory. His worms are all gone, his heart is good, he's shaken off the dirt of the grave, he's radiant. And he was an unwanted dog at the time, too!

OK, beyond that, the other dogs showed up, though I won't mention each by name. Eggard said, "I was his first." My current dog said, "I was his last." Which got old, since they were repeating it over and over. I finally get fed up with it and say, "There's room and time for all at my glorious table!"

"Gather with me, my fantastic dogs, and let us sup!" So there we are, like in the Last Supper, me in the middle, surrounded by dogs. As all this is going on, my great relatives (humans) start filing in. They welcome me, and I'm friendly, but I have to ask them to come back later. "As you can see, my dear family, I'm still dealing with my dogs."
Posted by dbkundalini at 7:50 PM