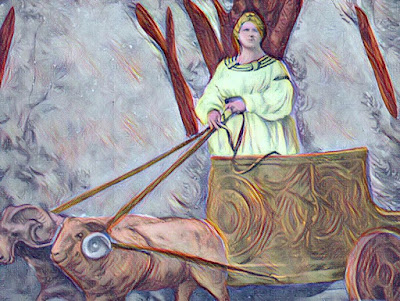 PROLOGUE: Lend me your eyes. Look at that picture, man. Isn't that a thing of beauty? I'll say it is, since I worked on it and am in some degree responsible for it. (I didn't make the original, of course, since I can't draw flies.) Looks like Julius Caesar, too, doesn't it? In a chariot being pulled by a couple brute animals, bred back then for that purpose. I really like the trees, how they stand out, evocative of entire trees but only a few random limbs or trunks.

NON-PROLOGUE: I'm making my way through The Adventures of Superman TV show again. And as I already well know from childhood, Daily Planet editor Perry White's go-to expression of outburst -- astonishment or disbelief -- is "Great Caesar's Ghost!" At some point in the first 8 or 10 episodes, he says it a time or two. It stands out more for me now as an old man than it did years ago when I was a kid. Because people just don't say things like that anymore. No more than we'd say a similar phrase that old people (on TV anyway) used to use, "Land of Goshen!" Now they just say "What the hell" or worse.

Later in the series there's even an episode in which some guys gaslight Perry White, with one guy dressing as Caesar and showing up at Perry's home, etc. He's got the weird helmet they used in Roman times, a kind of mini-skirt of mail, the strap-em laces and boots, legs a'showin', the whole bit. Perry is of course taken in and doesn't know what to think, how to overcome the nauseating effects of the whole scheme. Superman flies in and tidies it up, sending the faux Caesar down the Appian Way to the closest clink.

Perry White and the '50s aren't so terribly far away. Kind of a while back. I was born then -- how about that? -- so even though I'm getting older all the time, I'm not exactly ancient history. Yet when's the last time you heard someone use the expression "Great Caesar's Ghost"? It has to have been a while. Anything else sounds better. What the hell? What the fuck? What in Sam Hell? Goddammit to a Christless Hell is one I use from time to time, which is very interesting, isn't it? I am very invested in the Lord, let me put it that way ... He's building for me a cabin in the corner of Gloryland, and some glad morning I'll wake up there, arrange my things, take a shower, and go out to see what it's all about. Now, if there were a Hell in the traditional sense of the word, isn't it damned awful that it would somehow be entirely apart from Christ, Logos, and even an ounce of good or light? I shudder... I used to dream of it as a kid, brought up in the church when Hell was the main attraction week after week.

But no one in the show ever offers up (in my memory) surprise at "Great Caesar's Ghost!" Not Jimmy, Lois, Clark, or even Superman. They put up with Perry's brusqueness and just chalk up the expression to "Everyone's gotta say something, we guess." It's a personality device, his catchphrase, and that's all there is to it. It makes me wonder when they were doing the writing that someone actually pitched the "Great Caesar's Ghost" episode, since it assumes a guy who says a phrase would be especially susceptible to it being literally true. I don't see that. We're usually able to separate blank expressions from daily reality very easily.

I should read up on Julius Caesar a little more. Maybe I'd dream of him. Maybe I will now, having written this. "You summoned me, here I am! None of those other people can see me, only you." Etcetera, etc., and so forth... I know I'll be terrified -- maybe that's true. It could be one of my patron saints, George Reeves, will swoop in and save me. Let's hope, shall we? that George Reeves, whatever happened to him long ago, also has a corner in Gloryland. And that he and I get to be fast friends. My so-called friends from long ago used to (not often) taunt me that Superman killed himself, etc.

That's it! I get to Heaven, I immediately find George Reeves. Then we get together with the whole Superman gang, and go find John Hamilton (Perry White), and Julius Caesar -- say he somehow makes it -- and we have a damned ball? How about that?! I'll take that over a Christless Hell any day of the week.
Posted by dbkundalini at 4:04 PM