Let's Sleep Till Spring Gets Here 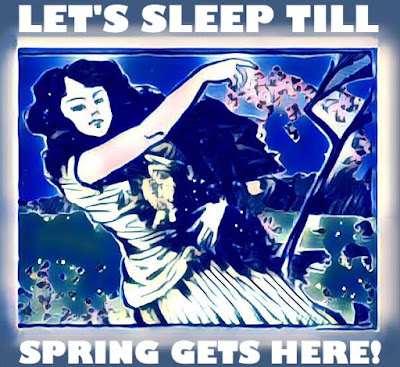 It's a bad news and good news story. The bad news is it's Christmas Eve, with lots of bad winter weather threatening our happiness for the foreseeable future. The good news is I have a plan to deal with it. With safe, wonderful, beautiful sleep being the answer.

Recently I've come into an abundance of time, with official retirement. So obviously I have the inside track. But even if you're not retired, you can do your part to get rid of winter ... quicker. Yes, I'm the first to admit it, we can't get rid of winter just like that. But if each of us does our little part -- none shirking -- we can overcome this bastard winter weather much more speedily.

Of course winter weather is not an enemy to everyone. To those folks, I lift my thumb to my nose and make a rude noise. Including guys who plow the roads, folks who run ski resorts, winter tire dealers, snow removers, etc. It's people like you that make things harder for people like me, who'd just as soon winter didn't even happen. If it were in my power, yes, I would obliterate winter, damning the consequences. If it meant the calendar was screwed up, the atmosphere were half lost to outer space, the ice caps were transformed into a few trays of ice in a museum, I'd do it. Remember a few years back, when I proposed mirrors in space to increase global warming -- strictly for comfort's sake? It didn't go anywhere because I'm just a guy, with no connections to speak of. I have indeed met politicians, some of the strongest men (and a woman or two) in the world, but they were more or less only interested in me as a hand to shake so they could claim to care about the average joe. They exploited me.

Today's idea to get rid of winter -- or drastically curtail its reach -- doesn't have anything to do with mirrors or species-decimation. It's more a scheme of individual initiative, involving something each of us already does, SLEEP. It's an indisputable, provable phenomenon that sleep speeds up time. I've said it since I was a kid. When we were learning about the Lincoln-Douglas debates, and later the Civil War, I not only held forth on the subject of Sleep and Time, but demonstrated it (many teachers had disputed it) by sleeping through everyone else's presentations. "It's disruptive," the teacher told my parents, but Mom and Dad were happy I took the initiative to stand up -- or sit down -- for my beliefs. I put my head on the desk, dosed off, and when I woke up a minute or so later, the class was over. True story. The most regrettable consequence is I'm a complete moron when Jeopardy's on.

That's my plan to get rid of winter. We sleep through it as much as we can. Hey, if you have an argument about it, take it up with the bears. The bears know! They crawl into their cave, plug in an electric blanket, and sleep. The cubs are nestled in their little cribs, each with a nipple and a 20 gallon bottle of milk, and the parents doze off. The only time they wake up, as I understand it, is every other week for a few minutes to change the babies, then back to dreamland. Before they know it -- and the perception bears have of time has never been sufficiently explained -- it's 20 minutes later and winter's over.

As soon as I get done writing this -- and I'm typing so fast, it'll only take another 3 minutes tops -- I'm headed straight to bed. And I don't plan to wake up until next week at this time. Just to check my Super XL Adult Briefs and take care of any hygienic needs there might be, maybe eat some Chex Mix and have some eggnog, and I'll be back to sleep. Oh yeah, and the dog. Probably change her diaper, take her out, refill her bowls, and wish her a Happy Rest-of-Winter till next we meet.

For this project I actually bought one of those super thermal sleeping bags. The kind that has so much innate heat you'd swear it was a living creature. They're awesome. You crawl in and it's like being at the Center of Existence. Nothing but heat and darkness, like in your mother's arms, or better yet, her womb. That's when we were all happiest, after all. These sleeping bags have everything mom had, except an off switch. You crawl in, set your Inner Man to wake at such and such a time, and doze off. I love the sensation of tumbling down and down and down to my own safe secure place. I haven't exactly worked up the ability to realize everything about it, but a few more years -- let's say when I die -- it's going to be blithe consciousness the whole way, baby!

This is much more limited than that, obviously, but still very useful. I'll sleep, I'll wake -- likely to face the unpleasantness of a dirty diaper -- then sleep, with the cycle going on and on, but seeming to be a couple days tops, and weeks and months will have passed. Winter will be wonderfully over! No more snow. It'll be Spring! The greatest time of year. There's only two seasons I like, Spring and Fall. If I successfully obliterate Winter, you know what this means for Summer.
Posted by dbkundalini at 3:25 PM