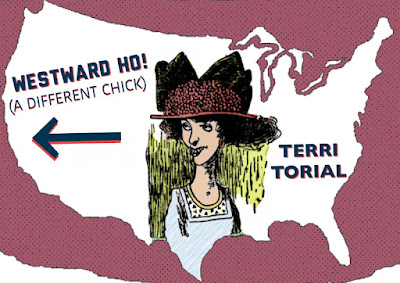 It probably goes without saying -- since many of you know the kind of guy I am -- that I've had lots of girlfriends, and, for that matter, boyfriends. In relationships, I'm always faithful, but sometimes things just don't work out, through no fault of anyone, but never mine.

One particularly ravenous specimen I briefly loved, and virtually gave my reputation for, was a certain Terri Torial. Heard of her? I've never heard of any other, so don't Google her, because I can't guarantee you won't find her. Let me warn you if you find her, she will track you down, and that won't be the end of it. Far from it. As the name suggests, she has a way of glomming on to what's in her path, and you'll be lucky if she doesn't suck you dry.

It's funny sometimes about names, when the names are funny. You could have a Miss Dour, and she'll be perennially in a funk, for example. I actually had a teacher named Miss Crabby. Then she married a Mr. Grouch, so it was a wash. She didn't marry above her station. Then in sixth grade I had a huge crush on a Jeanine Syphilis, but I kept thinking "What kind of name for a girlfriend is Jeanine?"

As for Terri, as the name suggests, she's had an overwhelming covetousness for territory, real estate and beyond. What's for sale, she wanted. What's yours is hers. If it's not for sale, name your price. The price is right, and really truly it is if she has a boyfriend willing to keep her happy. If this guy won't, the next one will!

Anyway, we traveled the country together for a while, and in the years since I've worked like a dog to restore my credit. Like this: I take out a loan for ten thousand bucks. I sit on the money and pay it back the next week. You do that enough -- a ten thousand or a million -- no matter how many bad real estate deals you had with your idiot girlfriend, you get back in their good graces, the creditors.

Among the properties I was personally involved in with Terri, just off the top of my head I'm thinking of northwest territories, southern plantations, oil fields (dry and wet), wheat fields, corn fields, fields ripe for the harvest but we had no tractor, huge swaths of desert, tons of disparate far-flung forests, enormous square footages of miscellaneous nothingvilles, ocean-side properties with and without beaches, farms, small countries, various sinkholes, Klondikes, and land so inaccessible the foot of man has never laid eyes on it and may never. We put a bid on China that time it was up for auction online, but were beat out at the last second by a guy who bid a dollar more.

For a while -- it was in the papers -- Terri even had me helping her buy up cemetery land. Prospective cemeteries and actual ones. You have lots of options. One of her worst ideas -- I'll call it a scam -- was to buy up all the vacant plots, then complain to the seller so persistently -- "This one has no view" or "This one has too good a view" -- that they got sick and died. Then as the main property holder, she had more votes than the rest of board, and we ended up shipping caskets/bodies to the Klondike property. People just can't be bothered these days to care about their deceased loved ones. And true, face it, it's a pain in the ass to have dead relatives. So out of sight, out of mind. For a ten dollar settlement your relatives will agree to anything!

OK, now the cemetery's been cleared, it's divided into lots and sold for big money. You plant a garden in what used to be a cemetery, the food's delicious. Grandma and Grandpa left behind the potency of their heart and soul, the best soil, loamy, so good. It's great for potting flowers, growing radishes, you name it. We had half a warehouse of the soil and actually sold it to another cemetery, whose north side collapsed in a sinkhole. More land for China.

Time fails me to tell the full story of how Terri came "this close" from buying the entire state of Texas. I was telling her that I read a good book on Lyndon Johnson. And how the land in Texas was either really good or totally piss poor. She didn't believe me, so she made an offer to the governor, and he came this close to selling the state. We promised to relocate him to the Klondike too, to live out his days counting his money. At the last second, though, he realized how corrupt that'd make him. He was the governor after all, not the president, so he had the sense to back out.

Eventually Terri and I broke up. But anytime there's a FOR SALE sign in the neighborhood I keep a close watch out the window. Or just any old plot of land, really, whether for sale or not. Sooner or later, I'm sure she'll show up at my place again ... or perhaps yours!

P.S. Terri Territorial is not to be confused with another ravenous woman I knew, gifted with similar flair, Kitty Westwardho. Kitty and I never dated. A one-night stand you pay for isn't a date, is it?
Posted by dbkundalini at 11:01 AM