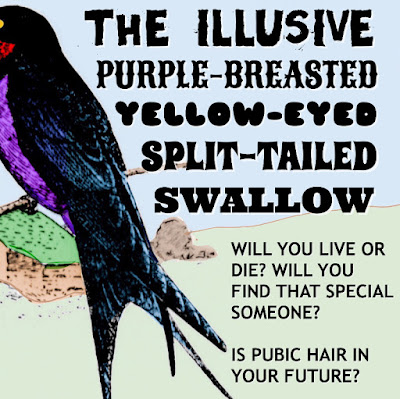 Ho, boyd! You’ll never guess what I saw today! In a flighting moment, there it was, The Illusive Purple-Breasted Yellow-Eyed Split-Tailed Swallow, up from the ditch, as big as life! Meaning — purple as in the color of kings! — I’m in for great treasure, a kingly reward, or, since king’s also mete out harsh punishments, maybe I’m just in for it... A bounteous wind lifts the Swallow, but could I swallow a harsh fate?

This lovely bird flies freely, without a thought, but I have to remain grounded and testify of the significance of such a sight. Because you never can tell in these modern times, there’s many a youngster without the lore, know-nothings unfamiliar with the facts of life beyond their own narrow rutting habitat. As I think back, yes, there was a time when I myself, callow and barely cowled, was unfamiliar with basic life facts. Then my nearest of kin stepped in and brought me up to speed.

When your eyes are opened, that’s when you can see. As I did that gladsome day when I saw my first Purple-Breasted Yellow-Eyed Split-Tailed Swallow. They filled me in on the significance, which I never fore got till then. But till today I hadn’t seen one in so many years, I haven’t even been thinking of it. Of course sometimes I wish for it, but hoping isn’t happening, till, up it jumps, it dashes, it turns tail and impresses me deeply. You know I’m forever a seeker, seeking omens, checking my Tarot, watching the chakras in spin, and even looking at life cross-eyed — or with one eye closed — I buy reading glasses and immediately take one lens out — I’ve found it the best way to narrow my gaze to truly see. Then it happens and I have to wonder, are Purple-Breasted Yellow-Eyed Split-Tailed Swallows everywhere, but I only see them when they’re definitely out of mind?

Like today! I wasn’t thinking of them, and there it was, jumping up from the ditch, managing to keep its place on the driver’s side, where I could see it so clearly. Indicating 100 percent, the vision was for me! The beauty of this omniscient little creature waiting till just that precise second to bound out, when I was a mere 20 feet from it, is significant beyond anything else that’s happened lately. My heart’s racing, my breath is elevated. I haven’t had my innards tickled so dramatically since my first taste of Mountain Dew, then later when losing my virginity. I’ve seen the promised land in this brief flight of the spirit bird, being gypped thus phar but no more.

Watch for them! They’re always there when a major life change is coming! That’s what I’ve heard. I remember seeing one when I was a kid, without the faintest idea of any of this, and we later moved. So hard, but it led to good things. I was a third grade dropout! True. But when we moved I joined a different third grade. In that case, though, the Purple-Breasted Yellow-Eyed Split-Tailed Swallow sighting was just a few months before.

The next time I saw the Purple-Breasted Yellow-Eyed Split-Tailed Swallow was about the time of puberty, when it’s supposed to start. I was a late bloomer, OK? I’m not ashamed to admit it now, but back then I tried my best to shrink from sight around other boys and girls in the dressing room. O for those days of innocence now! I would’ve proudly strutted my stuff, but till the Swallow reappeared, I felt shame. Then I saw it and POOF! Just that fast, I had the pubic bush like everyone else! Not overnight, folks, the same damned day! My dad was glad, but said to be careful not to catch that tangle in a zipper. Man to man, he said it hurts like hell.

I mentioned losing my virginity. Please understand, my prospects weren’t great. I looked at the girlie magazines they had back then like everyone else. My cousins informed me of the various goings-on down there, I clipped photos, etc. I got in major trouble in 9th grade when I had some of the innocent girlie pictures — back then you didn’t know if they’d experienced a POOF like me; those things couldn’t be shown. I asked my cousins why that was, and the true answer we came up with was, “Must be something wrong with ‘em down there.” Anyway, I had the pictures and this nasty teacher came up behind me and busted me. My mother had to come in the next day and vouch for me, “He’s a growing boy, has a natural curiosity,” etc. The only thing she was mad about was I didn’t tell her about seeing the bird the day before. I never wanted to disappoint her, so her words were a bitter pill to swallow.

Then came the virginity thing a while later; sorry I got ahead of myself. Up popped the Purple-Breasted Yellow-Eyed Split-Tailed Swallow, and that same day I was in the hardware store and told the guy I needed a good screw. He fixed me up with his sister, also. She had one of the local shabby apartments, top floor. The floors were weak, the walls were mildewed, parts of the ceiling were literally hanging down. I looked pretty good to her and she to me. I didn’t tell her what we owed the tryst to — having read the bird’s omen — she just laid back and enjoyed that beautiful minute of paradise, once I became fully aware of the geography of the female physique. It reminded me of the slip n’ slide mat the other kids had, very smooth. My mom wouldn’t let me have one because of her fear of discarded razor blades possibly on the lawn. The rest of my time with Monique was without dreadful consequences, despite the Freudian possibilities of her haven of best becoming life’s worst gaping maw.

Those were such major times, I’ll leave it at that. The other times can be summarized by various moves, job changes, and starting this blog.

Now, though, today — literally within the last 20 minutes — the Purple-Breasted, Yellow-Eyed Split-Tail Swallow jumped up again, one of the closest I’ve ever seen. Meaning....? What DID it mean? I’m 65, in excellent health... Do you suppose — I hate to think about it — that I’m going to die? What else comes next? I don’t know what comes next for me. The other times I saw the birds it was generally for good. But there’s no telling what it could be, except it’ll be something. It could be I’ll be leaving soon, although I’m supposed to live till 85...

But whether 65 or 85, there’s no real difference. I was perfectly content not being present for the first 15 billion years of the Universe, I’ll probably be fine whatever the afterlife is or isn’t. I’ll just enjoy my days here, however many there are. Which might be the message of the bird for me this time. Nothing major happening till I see the off ramp. And there it’ll be, The Purple-Breasted, Yellow-Eyed Split-Tail Swallow, jumping up from the weeds! So enjoy yourself, read, write, listen to music, walk, talk, go half-crazy now and then. Be happy and die with contentment.
Posted by dbkundalini at 11:21 AM