I Will Never Give a Colonoscopy 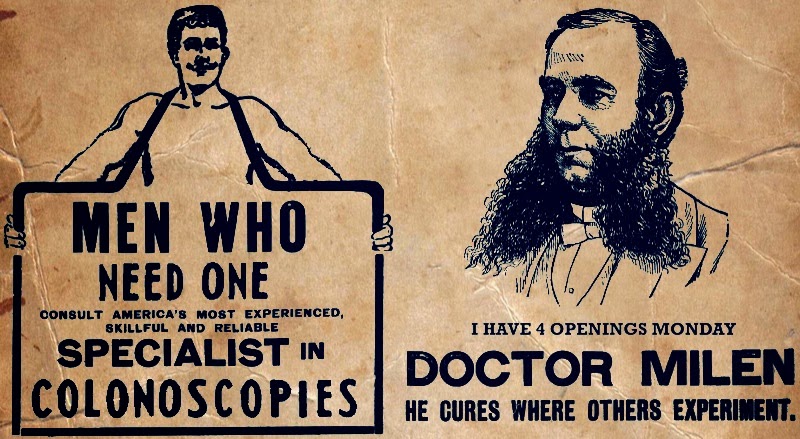 I had a major flash of insight at my doctor's appointment -- I will never give a colonoscopy.

It being July, it was time for my yearly physical. This year I did things a little differently. My old doctor retired, in like May. I'm thinking he knew July was about to get here again and he got out while the gettin' was good. Which normally takes doctors a while. You're a doctor, you have a bunch of patients. They all have to be notified, then you have to get a guy to take your place. He worked fast.

All was ready and the new doctor came on board. Of course I got the notification so I knew it was going to happen. So this year, instead of working out like crazy starting in May so I'd look great in July, I decided just to forget it. The new doctor wouldn't be impressed if I was in great shape. He'll only be impressed if I'm in better shape next year.

So there I go. The day of my physical I actually felt pretty good. But it's been a year like this: Whatever cushion there's been in my knees all these years, suddenly gone, I've had a ton of muscle pain, and indigestion like you wouldn't believe. I can stand muscle pain, but indigestion like this is a bastard, unbearable. And here's why I had such freakish indigestion, because I've been taking fish oil pills for my knees, which worked. Making a terrible trade off, no knee pain, but indigestion that took away my will to live.

But a few days before my appointment I dropped the fish oil. I read on the internet there's a "non-indigestion" fish oil pill, and thought I'd ask the doctor about it. So I get there and my indigestion is virtually gone, my knees are feeling great, and I'm on top of my game. After no exercise. He reads the report from last year and I'd lost a couple pounds. I haven't done labs yet, so there was nothing to compare with last year there. But he was impressed. Meaning I'll have to really work starting next May to top it.

In our discussion, then, we got on the topic of my colonoscopy, which, according to his records, I last had in 2005. Since they're good for ten years, that means mine is due next year. And, in fact, he, the new doctor, told me he does his own colonoscopies! Making me, honestly, very lucky. I don't have to get a guy from out of town (like in 2005), nor do I have to get a guy who doesn't know me; I'm going to have my very own new doctor doing it. That's great!

The major flash of insight came at this point, when he said to me, "I just did four on Monday." Four colonoscopies on Monday, I thought, that's something I'll never be able to say. Which is a little sad, because he said it with a great deal of pride, both being an achievement and to assure me that he's quite competent at it. I can indeed rest assured that I'll be in good hands with a guy who's done it so many times it's second nature, old hat. But still it's something he concentrates on in a dedicated way in order to have the pride to announce how many he's done on particular days. I said, "That's great."

Since then I've thought it over so many times. It's made me a little philosophical, if you really want to know, to consider the finality of it. Because of my choices in life, and now being 61, the path to me is now forever closed to ever be a doctor. I will never give one single colonoscopy. This lucky guy does four on Monday, old hat, and I'll never do even one ... not one in the years remaining to me.

Looking at it in print on the screen, it doesn't look very profound, or worth considering. But you probably know how it is with thoughts. Sometimes you have one and it hits you in a profound way. That's what happened this time. It's one more regret for someone just naturally wistful. I like the new doctor. I just hope he doesn't bring me down like that again.

P.S. -- It actually is conceivable that I could yet perform a colonoscopy. If we were together in a wilderness setting, and everything was very dire, and you were going to die anyway with a polyp the size of a breadbox, it would be foolhardy to forebear the procedure and surgery, even with an amateur's hand doing it. That would be a day neither of us would forget. You'd be biting the bullet and getting drunk. And I'd be sweating blood and hoping they believed me when they found you dead.
Posted by dbkundalini at 3:11 PM