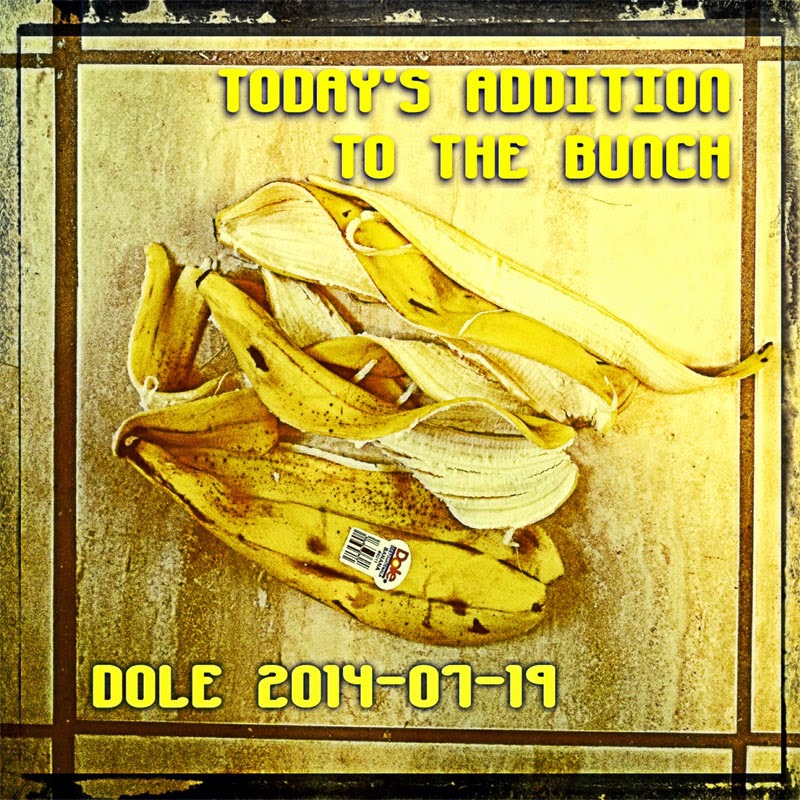 I think I've figured out the banana. Like everything else of nature, it wasn't made for us but its own sake. This concept was an eyeopener for me, like with flowers being to make more flowers and tomatoes more tomatoes. We're just interrupting the process, much out of necessity in certain respects, to eat them, for our own natural process.

Anyway, here's the banana: The little nubby we always pinch off is its seed, and the banana part is nourishment for the seed. The stringy bits are like conduits for the proper utilization of its nourishment. The flimsy peel is a dissolving husk.

As I'm standing there contemplating the whole wonder of it I'm thinking how we've trivialized it. Like in the phrase "going bananas" for insanity. Bananas aren't insane. Truly, to go bananas ought to be an expression for having it together.

Way back when, of course, as a youngster growing up as a kid, then through my 20s, 30s, and 40s, I was in one place, real immaturity when it came to the fruit with the yellow hue. It wasn't till my 50s that a mature understanding started kicking in. I remember blowing someone's mind when I told them about flowers. The reason flowers don't last a week is they're in a hurry to make more flowers! And the same thing with bananas, going "bad" in a few days; they're just trying to go to seed. But what do we do, make banana bread out of them...

I wouldn't mind recapturing the days of my innocence when I thought the banana was just a fun piece of food. Which I guess they still are. I still like them but I do feel a little sorry for the seed now when I chuck it. I take all this somewhat seriously.

But I don't take it as seriously as this guy I know. He's something like a hoarder, but he's scientific about it, cataloging, indexing, etc. Speaking of going bananas, I guess he's a candidate for that, literally. Because he went whole hog for bananas, even to the point of saving the peels. You believe this, right? I can see how it would be hard to believe. But some people -- you know, when they're kids -- you give them a chemistry set and one thing leads to another. They might breed a million mice, make stink bombs, or devote their full attention to something like bananas. Seriously.

And he may eventually have the last laugh. Glen, that's his name. Someday the world might thank Glen, because, honestly, I doubt if very many people are doing this. But someday actual scientists, white coats and all, might need to get their hands on his collection, whether to chart what went wrong in the past, or to see what they might do for the future. We've all heard of bringing back dinosaurs; what if we had to bring back the banana?

I remember a few years ago I read something on the WWW about there being some trouble with bananas. It projected a loss of crops, with the correlate drop in availability of bananas like we have now. I think of that when I'm having a banana split at DQ, that someday it might be 50 bucks for one. I haven't kept up on the latest news of whether bananas are still a threatened species, but since nothing ever improves in the world, they probably are.

That's when Glen might really come in handy. Because he has peels going back to the '60s, to the early days of the Velvet Underground. Various kinds of plastic bags, drying apparatus, shelves, cabinets, plugged test tubes of scrapings and juice, etc. And all of it cataloged, marked, the whole bit. If you visit him, his strictest rule is when you're in the garage you don't breathe.

You ever heard of this place in Norway (or somewhere), the seed bank? Where they have the purest collection of seeds of plants, the original stuff, not hybrids? If anyone from there's reading this, and you have an opening, get hold of me. Glen has the world's original bananas, and I believe he'd travel.
Posted by dbkundalini at 7:03 PM