Memorizing the Declaration of Independence 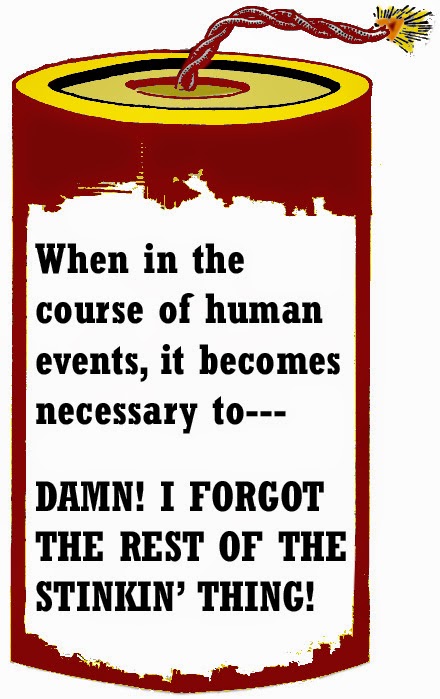 You know how I'm always talking about how smart I am? Well, I thought I was, but now I'm not sure.

I've long had the desire to memorize things. I got the idea for this from a little old lady I used to know who memorized and recited poetry all the time -- all the time -- and always followed her recital the same way, a half hour of lambasting the rest of us, who hadn't memorized a thing. It seems that when she was in school, back in 1914, kids had to memorize a lot of stuff. It's like they didn't have enough books to go around or something. Either that or they had nothing better to do.

I know this is true of her generation, because I heard my own grandparents reciting a few simpler things they'd memorized in school, also ages ago. Now they're dead, and the little old lady -- who incidentally only had one eye, which makes it much more impressive; she wore glasses but one glass was fogged over so you couldn't see the sewn up place on her face -- is also dead.

And now here I sit, with two functioning eyes, and the vast library of the world wide web to assist me -- to find things worth memorizing -- and I couldn't memorize a grocery list. Or something simpler. The main problem might be I didn't get started early enough in life. So my brain doesn't have the trained grooves for memory work. I'd check out that website that helps you exercise your brain -- the woman advertising it on TV's kind of cute -- but I can't remember what it is.

Anyway, today being the Fourth of July, I had the idea of reading the Declaration of Independence. I've read it a couple times in my life. Mostly what I could already tell you by memory is that the king of England at the time was named George. That's a start, although admittedly it's not a heckuva lot to go on. What it was, what was going on is, the Americans at the time were very aggravated at George, so they wrote up the Declaration of Independence ... and the rest is history. Something, something. And our first leader was also a George!

OK, for some reason it's always easier for me to remember the first few words of something than it is the next few. Like the Bible. I always remember, "In the beginning God created the heavens and the earth," words to that effect. The rest, I could probably hack out a few more words more or less accurately, but, again, my memory isn't what it should be. Did I already say that?

Let's review how far I got: "When in the course of human events, it becomes necessary to--" No, I just checked the webpage and the next word is "for," not "to." I'll just copy and past the first paragraph and we can review it:


When in the Course of human events, it becomes necessary for one people to dissolve the political bands which have connected them with another, and to assume among the powers of the earth, the separate and equal station to which the Laws of Nature and of Nature's God entitle them, a decent respect to the opinions of mankind requires that they should declare the causes which impel them to the separation.

According to that, "Course" is capitalized. Must be one of the Quaint Customs of the Time. So we've got a "Course of human events," the progression of time, pointing to a particular moment in that course, the "When." Then there's a people feeling it's necessary to dissolve the political bands that they had with another. Then they intend to assume "among the powers of the earth," other countries, a separate and equal station, blah blah blah. I'm sure George didn't care for this: the Laws of Nature and Nature's God entitle them to make this assumption. OK, When that necessity arises, they care enough about the opinions of the rest of the world to declare the causes of the separation.

That's a little different than now. Isn't our attitude now just to stomp the crap out of people and let them like it or lump it? Maybe I'm thinking of some other country, but I'm pretty sure ... I seem to recall ... although my memory ain't great.

That, my friends, the first paragraph is frankly more than I can handle, let alone the rest of it. I'm not one to admit failure easily, but the Declaration is simply too long for me to get it entire thing down pat. Not this year! Maybe next year when I'm older ... and, I hope, wiser.

P.S. -- Obama ought to prank the Republicans and just recite the Declaration of Independence on the radio. Since most of them likely have no knowledge of it, they'd hear it and start bitching, "He's totally full of hot air!" Then he goes, "It's the Declaration of Independence, you bozos!" They'd go, "It came out of your mouth, we still hate it!"
Posted by dbkundalini at 6:07 PM