Chipping Away at February 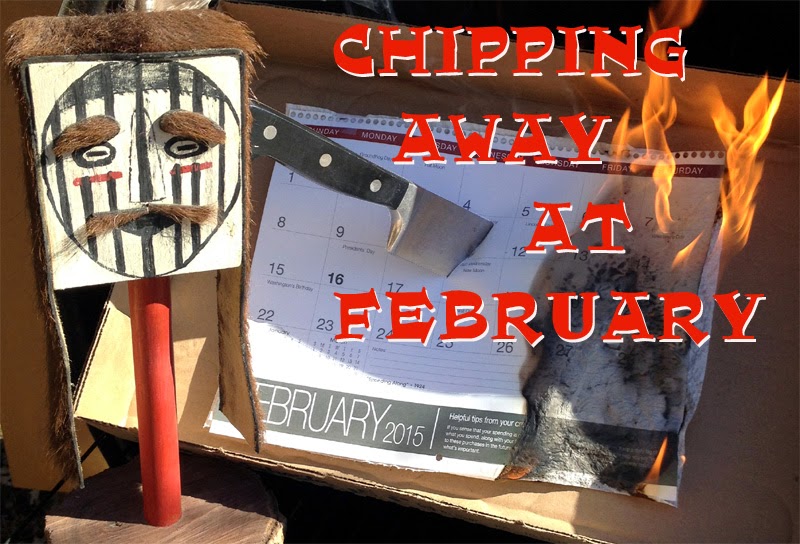 It feels great to be taking a stand on an important issue. I indeed have finally stepped out and accepted my calling in life. And I hope I have your full support, for then our common goal will be so much easier to accomplish. That is, destroying the "month" of February, and finally having a calendar we can be proud of.

Of course I know it's a huge step. And if the critics are right, it's a huge challenge. Although I'm extremely confident it won't take that much. I'm honestly thinking that as early as Feb. 3 we'll probably glimpse ultimate success. Mere days away! But there's a lot of work to be done, if we're going to not just glimpse success but grasp it. For me, putting that knife through the calendar was a real rush. It did something powerful for my resolve, having taken such a decisive step. And now, once the knife's in, there's no turning back!

As I said, the critics see "a huge challenge." Which, as I recall, is always the way with critics. It's probably "a huge challenge" for them to tie their shoes, especially since their hands are always so busy wringing themselves! Frankly, if we left life up to the critics, we would've never evolved beyond the slime. They would've been slime oozing from a bit of moss, clinging to their precious comfort zone. While the rest of us were looking to trade in our gills for a set of lungs and get on with the damned thing.

Part of the challenge with February, as I understand it, is that the world's had too much history with it to dump it now. People were born in February, they commemorate anniversaries, their loved ones died in February, the calendar appears set in its ways, etc. Well, check the history of the calendar. It's changed a lot over the years! September through December are named for the numbers 7-10, but obviously they're known by different numbers now. I can't remember why they needed to add August, but they wanted July for a place to put July 4.

My current proposal is that we add a number of February's days to January and March, then leave, say, the last 13 days of the old February as a mini-month. That'd be like crazy time. Like a desert on the earth, a time of desolation. Lent's usually about then. We'd squeeze it into 13 concentrated days of ashes and mourning. Any new births in that 13 days would have their birthdays reassigned to the happier months, as would happen with existing birthdays. Eventually the word February would be synonymous with sticks in the mud, the sorrowful, the unhappy, and of course the deranged.

I think we could shame prisoners even further by reassigning their birthdays to those 13 days. It'd be like a hot brand they could never overcome. They probably already do this on some other more intelligent planet, so we'd just be keeping up with them by switching. Having said that, I would not leave the word February in the mix. To give those days the ultimate shame, thus making us more reflective, we would need to go beyond the old with something completely new. What would it be? Right now I'm in destroy mode, so I can't think of anything. Scorpion, Lizard, Dry Heaves?

Friends, I said I'm confident, and that is true. But there's still things that could go wrong. And yet -- All praise to the native god in the photo! -- I'm sticking to my prediction. February 3 sounds just right as the day that I believe we will glimpse our ultimate success. Meaning, if you want to share in the credit of this seismic shift in time, you'll need to jump on board right away. Our deliverance is less than a week away!
Posted by dbkundalini at 12:55 PM