Destroy February -- Are You Wid Me? 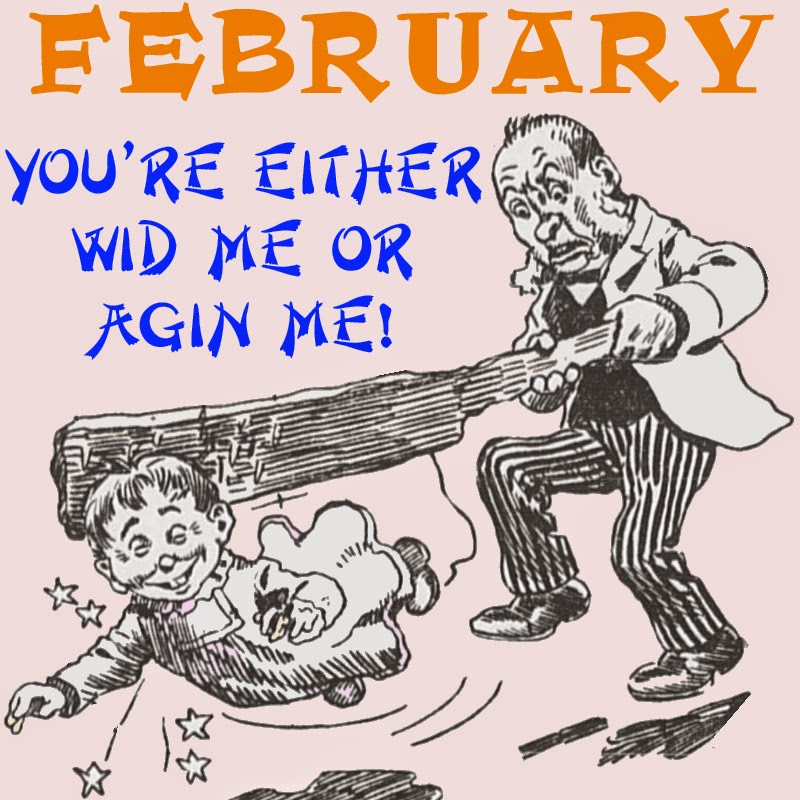 As we come to the end of January, a great month, we find ourselves on the eve of February, the worst month ever. Hard to stomach, really, that this stubby block of days, put together apparently like Frankenstein's monster, out of the leftover parts of previous versions of the calendar, can be so close to January. Even the sound of the month's tell the story: "January," sexy, zippy, strong vs. "February," sounds like being stuck in a briar bush.

The last few days I've been trying my damndest to garner support for my side, and, I gotta tell you, support's hard to get these days! 1) Everyone's got their own fool opinion; 2) "I'm too busy" to learn the facts, or to even care; and; 3) There's more important things to worry about. Let me just say, each of these excuses is simply blather. People have learned (probably thanks to the internet) how to gum up any issue. Well, let's "black 'n' white" it, OK? Are you wid me or agin me?

Whether there's more important things to worry about or not, and there very well could be, what good's your worrying doing? Everyone I've talked to on this issue has been your average idiot, whose life in this world is more or less locked on the default setting, which is lethargic. Man on default is the most worthless creature the world's ever belched out. The other species have to use their wits, their instincts, their wiles -- not man. Man's such a fool he expects everything to be handed to him on a silver platter. Then he'll sell the silver for drugs. It's little wonder he doesn't care about February.

Seriously, folks, this struggle of mine, has really opened my eyes, that if folks aren't wid me they truly are agin me! And I've told them that, too: "If you ain't wid me you're agin me," I said to this one fool. He stood there silent and I thought I had him. You know the kind of conviction a person can suddenly have, like when they realize their own home is under attack by the enemy, and if they don't do anything about it they themselves will be homeless. His hands quivered, his lips shook, his eyes were downcast; I saw a bead of sweat pop out right above his left eyebrow. I knew I had him. Then the fool goes off, sneering, "Them I guess I'm agin you." Stupid turd.

So that's how they want to play it, eh? In the face of such opposition, I stood defiant, thinking, "We'll see about that." I also thought to myself, "I hope the enemy does attack your home and that you're left on the street, you bastard." It's true, I can be vengeful, even though you basically think of me as a pussycat; I'm not proud of it; it's just I care about this issue so much. February must be destroyed, and that guy!

OK, the opposition -- more or less defiance identical to apathy -- has forced me to up the date, now to Feb. 12 before I think we'll see a glimpse of success on destroying February. Believe me, with my efforts only just beginning, I don't believe we'll have to revise the date again. I'll be pulling my hair out in frustration if that happens. Let me just throw out the plea: "Be wid me, not agin me!"

Here's something I'm gonna do to garner support, and show my disgustitude with February. I'm going to post at least one blog post everyday in February. Got that? If I can't gum it up on the front end, I'll sabotage it from within during its idiotic run. Like that. It'll probably make the nightly news: "World Known Blogger Seeks Destruction of Month." I actually am "world known"; I get a number of people from Ukraine and Russia, if that's any good. I believe they're definitely wid me.
Posted by dbkundalini at 1:08 PM