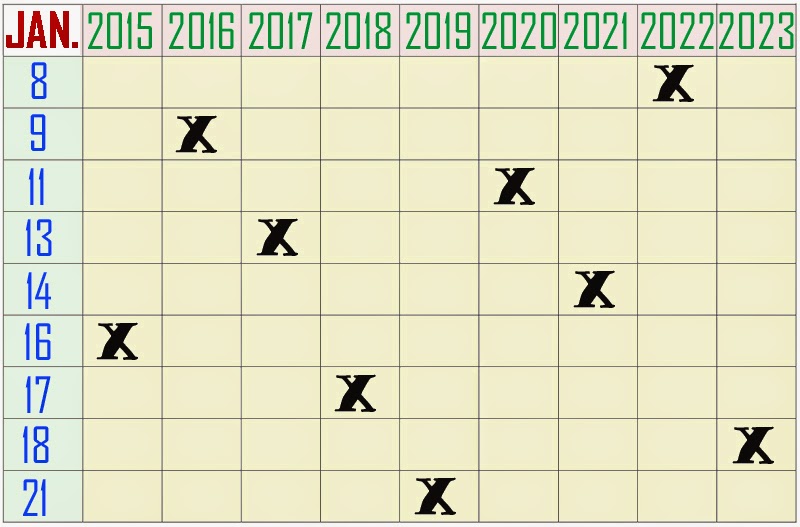 The big day's coming, just a couple days till January 16, my birthday! I can hardly wait for the celebration part, even though I'm not that crazy about getting older. But that's OK, too. Because I can't do anything about it, I may as well put a positive spin on it.

I love being a January baby -- "January baby, full of grace," all that, and also because I don't have to wait as long for my birthday to roll around. The old year ends, the new begins, and wham! there it is. Technically it's as early as January 7, even though I don't know the next time that will happen. I haven't looked that far ahead.

I had a question from someone about when my birthday was, prompting me to sketch it out for the next several years, up into 2023, which is so far away it sounds like science fiction. Space 2023! The last frontier, as man breaks the bonds of earth and makes his way to the stars! Bye bye, have a great trip, I'll be right here when January 18th rolls around, having a great birthday. Although by then I might be in the nursing home, since I'll be exactly 70-years-old! Hmm, 70... Grandma died when she was 70...

Having the chart is great, because it makes it just as handy for me as it is for any of you. Because even I can't be expected to remember when my birthday is year to year. It's complicated. But having a chart really simplifies things. I need to send a copy of it to my family and loved ones, and real life friends, who might like to send me a card or gift, if they only knew when the big day is.

There's a few simple rules I go by that limits when it can be. As I said above, the earliest it can be is January 7. I never want it exactly around the New Year, since that would detract from the glory of the day. There's also a religious reason. January 6 is Epiphany, when the Wise Men came and did what they did at the manger. I will not horn in on the end of Christmas!

From the day I was born, I never actually wanted to be born on a single digit date. But I've found that allowing the periodic appearance of the 7th, 8th, and 9th does have a value, putting me in a thoughtful mood -- a little blue -- which I use it to enhance my feelings for the rest of the year.

I'm glad also that I was not born on one of the oddball days of the year. Like February 29. There was always some idiot kid running around school going, "I'm only 4 years old!" I never understood the fascination with being 4. Another thing is, I don't like February period, so every date in February is oddball to me. It's more or less a shorter month they stuck in to fill in the rest of the year, but they put it second so it wouldn't look like a last ditch effort. Because of February my other limit is January 29. I don't want anything in the 30s so close to February. Avoiding the taint of February is a big thing with me.

Oh, the technicalities of life! The things we do to honor ourselves on the day of birth, that one special day we look back on when our mother gave us birth. And hopefully there was a father around, as well, to provide for us. My dad said he was my dad. And since I look just like him, I half believe him.

See you January 16! Happy birthday!
Posted by dbkundalini at 5:34 PM