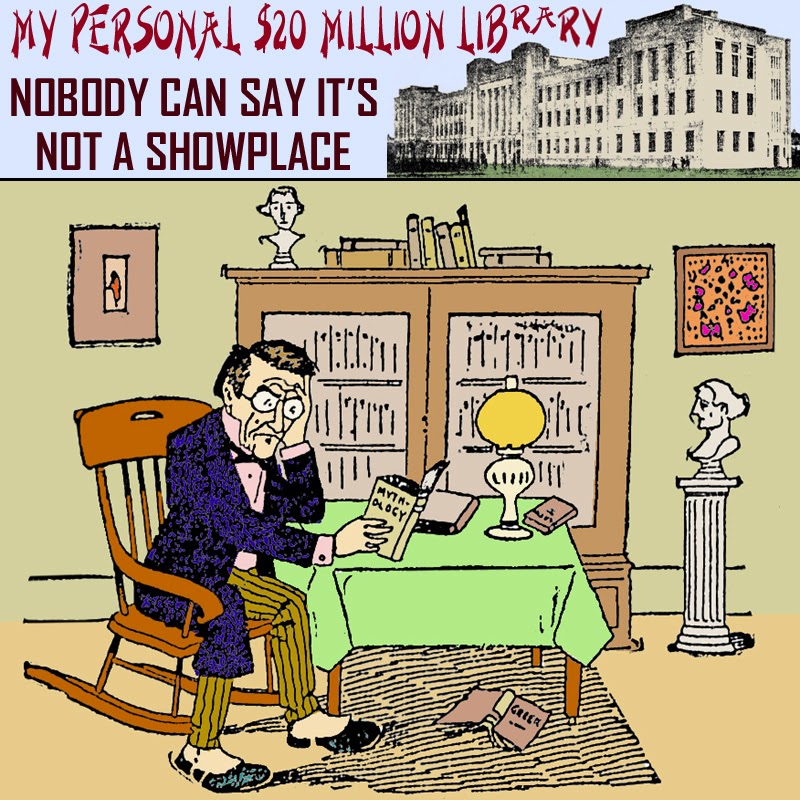 The Pink Professor and I bade a fond farewell today to the billionaire and Garrett Al. They're off on an extended honeymoon, and, frankly, aren't coming back, unless it's someday for a visit. The billionaire has exotic properties around the world, so of course he wants to treat his blushing new hubby well.

Life after a month of a whirlwind is slowing down. Pink was going by the university to try and get back on staff. Then he was going to check things at the bar, the Roadhog Roadhouse, and make sure everything was hunky dory. If it wasn't before, it will be with him there, him being a natural at keeping even a roughneck joint like that running smooth and pleasant.

That left me on my own, at loose ends, till I remembered some of my own responsibilities, including a brand new $20 million personal library on the west side of town! I know it's hard to believe I could forget something like that, but that's how crazy it's been. Also recall, I own a worm bedding company in Alabama, which also slipped my mind, but that sounds totally blah.

The library, though, I'm interested in. I've always had to make do with a few bookshelves around the house. But now, with this huge new facility, I'm rolling in space and shelves and books and all kinds of fun things. And I'm going to take advantage of it for my personal studies! And it won't really be for anyone else either, unless, sometime down the line, I bring in a "visiting scholar" for whatever reason. Maybe for some of my burning questions, like, How do you get to be a "visiting scholar"? I've gone by the nickname "Super Brain" for a long time and I've never visited anywhere.

But I will be "visiting" my own library, three floors, a basement, and stretched out width-wise too, pretty huge. Enough rooms that I can sit in one a day for an entire month and never run out! I have all my old books, probably around a thousand, then I have another thousand or so picked out from the Biggest Book Sale in the State, and from there, I shall build it into the greatest personal library in the world!

And, hey! There's something very "retro" about it that I'm going to do. This is exciting to me. The building will have no internet access. It's going to be like libraries in the old days. Anything I need to look up, I'll have to take the time to find it in a book. Frankly, I'm looking up too much stuff online, because I tend to have lots more questions when the answers are that close, that convenient. But this way, if I don't want to give the full commitment to find out about something, I'll just let it go.

When I'm done with my collection, why would I need the internet? I'm going to have a full set of every encyclopedia that's ever been published! We used to have the 1894 Britannica, and I learned more from those old books than I ever did in school. Except I had to be careful, because they go out of date fairly fast. That's why I need all the newer sets, too, to compare and contrast. But I can see myself maybe coming up with inaccurate information. Like, say, I want to know who's currently president. I can look it up in all the sets, then split the difference. It's Millard Calvin Ulysses S. Hoover John F. Nixon!

Of course the internet's good for one thing, definitely for sure, and that's wasting time. Such as Facebook, Twitter, and sites like that, and, as I well know, you can waste a lot of time writing blogs. I bet I messed around with this blog 60-75 hours this month, all this business with the billionaire, Geritol, Pink, and myself. Imagine, I could've spent that time reading about Siam. Or the Louisiana Purchase when it was the latest thing.

I'm stopping right now and putting my slippers and robe on and I'll be padding around this vast library. Full of echoes till I get it filled. I'm like a lonely Hugh Hefner figure here, except now I have books and shelves instead of bunnies.
Posted by dbkundalini at 6:24 PM