An Act or Two Short of The Final Act 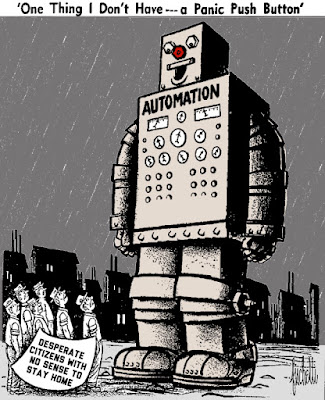 All the stuff I had to do in this Supreme Battle -- it was like fighting World War II single-handedly -- was so unbelievably hard, even I, The Golden Child, am not sure how it was physically done. Except to say, You get organized, you make a checklist, and you check it off as you go, step by step, till everything's done.

This isn't the final denouement to this sad (yet ultimately happy) situation with Myra Kula Electra, but it's darned close. The tide turned when the Tractor Promenade performed on the square, such beautiful stuff, a beautiful, intricate act. Tractors square-dancing tugs at your heart, letting you know that mankind truly has it goin' on.

The courthouse was lit and beautiful. I had a front row seat from my place in the alley across the street by the theater, in the upper chamber of the Robby the Red-Nosed Robot suit. Myra was torn between good and evil, with the tugging of her heartstrings drawing her toward "good," due to the charms of the square-dancing tractors. (As an aside, a few years ago I too felt the lure to a life as a professional criminal, but having seen the Tractor Promenade, I renewed my vows as a law-abiding citizen.)

Meanwhile, in the country, at my aunt's old place, Cousin Roto had loaded the old coal mound with enough explosives -- purchased on the black market from a guy who should know better -- to blow every demon there skyward, and propel them several counties away, depending on the breeze. As it was, he arranged the explosives at a slant, to give them more of a town-ward direction once they hit the prevailing winds. Roto followed my cue made by shining Robby's red nose directly toward his position.

As for Myra, she was atop the old hotel, just north of me, in a spiritual tug 'o war. When as the Promenade hit their climax -- the bearded "women" on their tractors facing the "men" on theirs, then flipping their tractors around as if to yield their backsides -- Myra made her choice. I don't know if it was her deeper romantic nature, or a sudden charge of hormones immediately stimulated, but she made a 65-yard leap from the hotel to the dome of the courthouse! (A decent enough jump, but I still gave it only a 7.5, because with that many demons flying in and serving as an undergirding cushion as well as offering lift, my grandma could have equaled or excelled it.

That left Robby to go marching across from the alley toward the courthouse. My aim was one of life or death. If Myra submitted, then life. If she did not, Robby's eyes were outfitted with nukes. Guaranteed to kill everyone in a 30-mile radius, and probably ruin some very nice tractors. To nudge her more certainly toward life, I had another surprise. The four prisoners Myra and I shared in common -- her more than I -- Tipsy White, Dashing Danny Whfrf, Spud Tuber, and Cannibal -- emerged from Robby's feet, which flip up from the toes like garages. (The remote at first triggered the groin area, where oil drains for oil changes, but with quick thinking, I stopped that and restarted it to trigger the feet.)

As the demons swirled, the fevered commandments of exorcists, multi-tracked earlier in the day (and adding 528 Hz Third Eye Opening music) to be an overwhelming force for good against them, cast them out. The sky opened, many were sucked up. The ground opened, many were sucked down. There was wailing and gnashing of teeth, enough for everyone remaining to take seconds.

My own teeth chattered, because I've got just enough evil in me, exorcists also give me the heebie-jeebies. Were it not for my countervailing good, my hands would've slipped from the joystick and Robby would've taken out the war memorial near the courthouse, a fatal faux pas in this day of superficial cliche patriotism, roused against those football players who refuse to stand, another subject for another day; our society being rife with stupidity, it's hard to cover everything in one swell foop.
Posted by dbkundalini at 8:42 PM