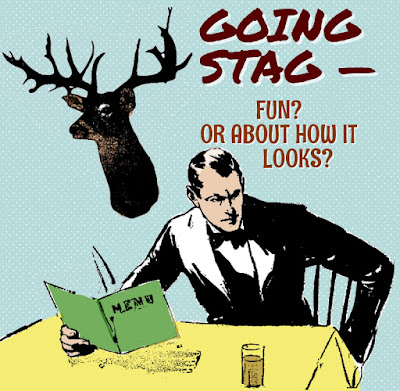 I used to always hear about going to things stag. One guy. I don't hear that much anymore. Maybe we forgot what a stag is, which would be the root of the idea. The way I remember it, a stag is some kind of deer or super antelope, standing at a river pass, alone, drinking, while the other animals keep a respectful distance, waiting their turn.

With just that definition it's easy to see how they got the phrase "going stag," which often applied to bachelors. Then one would be about to get married and the others had a stag party for him. His last night of complete freedom, hanging out with the other stags, drinking himself sick. Some kind of entertainment. That's when the stags got together, but usually they went to things alone. Not that I'm up on it or in any position to get clinical; I never did research on it.

Do I ever go stag? Afraid so, more times than I like really. Like out to eat, but I don't like the look of it or the feel of it. And that's the way with most stags. They sit in their car with their bag of tacos and eat them as fast as possible. It takes me a little longer because I have to put hot sauce on each one as I go. I was out the other day and another guy I know was also stag. I motioned back and forth between us, two guys doing the same thing, whatever it was, independent, alone, but briefly together and witnesses to the thing. He waved and looked down.

Childhood was better. Like when my mom or grandma would go with me to the doctor's office, or all the kids had to go. Now mom and grandma are gone and I'm old, so I'm at the doctor's stag. The nurses watch me come in. And give me the computer interface to type my info in. Someone they can contact? I have relatives, who no doubt have their thing going on somewhere, ducking in, ducking out. I put the funeral home. They appreciate the business.

Really, it's nearly everything I go stag for. The library, church. I don't go on vacations that much, but I know guys who do. Taking selfies of themselves in front of the the world's largest steam shovel, stag. I personally hate tourist sites: "It's all been done before!" Who cares? I've thought about going to Mt. Rushmore, but I'm iffy. I read the book by John (Fire) Lame Deer and he's dead-set against Mt. Rushmore. And from his perspective it's obvious, we should never have messed up that mountain! So who wants to see that? Especially stag. Although I wouldn't want to go with friends either, because no doubt they've missed Lame Deer's great book and would love seeing it. Guess I'd rather go stag, but I'd rather not go at all.

I hate to make going stag sound pathetic. It's just a fact of life. Most people go stag to the post office regularly. I'm at the post office a few times a week and it's a parade of one-person at a time. The dentist, I'm always stag there. In that case, I'm very breezy about it. I breeze in, greet everyone in a bubbly way. It's sophisticated enough there they've got your basic paperwork taken care of on the computer. There's nothing to it. They get me in, there's room in the chair for one, so stag is the only way to fly.

Wouldn't it be crazy to rent someone to go with you? As in professional daters; I can't remember what that's called. Escorts was what it used to be called. Probably personal assistant now. You go to a massage parlor. They see another stag coming in. And you offer to pay them up front just to go to the zoo with you. Where there might be some captive stags -- the real deal -- looking for a way out. Follow me!
Posted by dbkundalini at 6:39 PM