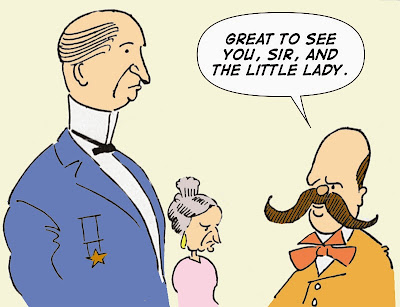 I barely know how to tell the story of Reginald. You've heard about him all your life; I can say almost all my life, since I'm older, and even though it seems like he's been around forever, he's still mortal like us all.

Somewhere in the world right this minute someone's in need of Reginald. History's shown that. And he's answered the call over and over. He's may not always be the first on the scene -- that's the province of attention-seekers and the vain -- but sooner rather than later, he comes calling. To soothe ruffled feathers, if that's what it takes, but more generally to act as oil on troubled waters. And more than once he's laid down his life for the world, only to take it up again. He's the first among his peers.

There's been a few times, myself, when I've been in the right place at the right time. It's then I have to pinch myself; 'Am I really here?' Life is sometimes like a dream. I pinch myself, and, yes, I'm really here! That happened at the latest awards ceremony for Reginald. With Izora, The Little Lady, at his side.

It was a grand affair. If you've never been, you really must. The decorations were extensive. Various banners and flags of the grateful nations. I kept pinching myself; that's just my way. I expect good things to come my way and I've never been disappointed. But I'm not always so optimistic that I can take anything for granted. Which I'd also expect to be the outlook of any well-rounded person, and here I'm thinking of Reginald and The Little Lady. They're realistic folk.

Anyway, enough about me. I could go on and on, but... A raft of speakers preceded Reginald, each singing his praises in a higher key. Until he was finally introduced to applause that rang out like the thunder. No one saw it happen, but it must've been right about here that The Little Lady disappeared. I hadn't noticed. All eyes were on Reginald making his way to the podium. What confidence, what a stride; cocks of the walk are only half as grand.

Reginald shared how honored he was for such a grand reception. He took his sweet time to speak of his company, his friends' companies, as well as the various governments and their good administrations paving the way for good. These are essential stepping stones in the work of diplomacy, whether on a grand scale or in the intricate and meticulous dealings that also have to take place. It's all important. Like cogs and gears and things operating smoothly.

As Reginald spoke, I thought what a stunning profile he makes. Others were no doubt studying him too as an example of inspiration. Certainly any naysayers kept it to themselves. As they should, anyone whose heart would be that dark. There couldn't have been anyone that far gone, but these days you never know.

This evening was an evening of evenings, an event to be sure. When the massive piles of awards, ribbons, trophies, and what-not Reginald had accrued over the years would be traded in for "The Simple Star" award. You don't get any simpler than The Simple Star. But equally, you don't get any higher honors than The Simple Star. If it's ever been passed out before in our time, I've never heard of it. The Lord himself had one over his crib, but that's the only precedent I know of. Until Reginald.

The man spoke simply and elegantly of the honor he felt. And how he would continue on, to the extent we would allow. He thanked all the guests for coming. And reserved his last words for The Little Lady, Izora. Every eye scanned the dais to pick her out, but she wasn't there! Reginald himself looked about, a little confused, until a smile played across his face. I nearly snapped a picture but my phone was down to 10% and giving me fits.

Reginald called to Jimmy, an aide at the door, and had him step out and see if he could find The Little Lady. For she had already slipped away and was in the kitchen, supervising and helping the clean-up crew! In her own wonderful way, like always, showing modesty and service going beyond the call of duty. She's seen enough awards given out, to her this was just more of the same. For her, service to the world, that's also her calling.

They nearly had to drag The Little Lady out; that's how reluctant she was to stop her work. But out she finally came, to the greatest ovation. She tossed her apron to Jimmy at the door and made her way to the dais. Reginald lifted her arm, pointing to The Little Lady, as if to say, "Huh? Huh? Am I right? Isn't she the greatest?"
Posted by dbkundalini at 8:25 AM