The Shrine of St. Cecilia 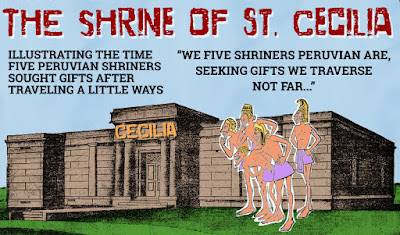 O! how many times I've listened to "The Shrine of St. Cecilia," the song! A bunch of times, so many. I wake up with the tune in mind. I'm out walking the dog and humming the tune or singing. It's inspiring. Musing over how there's trouble everywhere, devastation on a large scale in the area, storm clouds and winds on the march, but the Shrine of St. Cecilia remains standing, inviolate!

I love that song, but sometimes I get it mixed up with a couple other songs I have about St. Theresa of the Roses. So I think I'm singing St. Cecilia and it turns out to be St. Theresa! But they're inspiring too, one by Billy Ward and the Dominos and the other by the DeJohn Sisters. I honestly like about any saint I ever hear of, including St. Charbel of Lebanon and St. Rita of Cascia, who was a recurring character in a series of blog posts I wrote for Paranoia Week in 2014 (links below). I try not to hear about any other saints, because I know I'll like them and life will get complicated.

Today, though, we're thinking of St. Cecilia, also famous in song, with several versions of "The Shrine of St. Cecilia" available on YouTube. Her shrine withstands the various disasters that come around, giving hope and moral support to the people who weren't so fortunate. My life might be the pits -- and my house is actually right now undergoing major renovation because it neglected itself and became a shambles -- but as long as I know Cecilia's shrine yet stands, I too can make it through.

But where her shrine is is a thing I'm confused about. I thought it was in South America, since I've always heard about the Five Peruvian Shriners visiting it, having "traversed not far." But according to online sources, it's in Rome. Which is far from Peru, and allowing for continental drift, getting farther all the time. The confusion probably comes more from what is a shrine and what isn't. And whether the various locales in South America where St. Cecilia is honored are shrines per se. Regardless, we would also commend the Five Peruvian Shriners for going all the way to Rome and yet considering that, because of the saint's sanctity, "not far."

Still, the song of the Peruvians -- We Five Peruvians of Peru Are -- gives a great deal of encouragement to a lot of folks, though for me it's a love-hate thing as well. One of my family heritage things, which I wrote of a few years ago as well, involved Peruvians coming to America and being involved in abusing horses by having them kick their enemies to death. This was an immediate threat to me, having not been conceived yet, and not something I can imagine St. Cecila sanctioning. But every people group has their good apples and their bad, and I can't judge the whole crop by a few especially notorious bruises. Still, I'm watching Peru closely, because according to Grandpa, the Peruvians are among the baddest hombres ever to live. He said they have long memories and aren't given to an easy forgiving nature. The fact that it's all out-of-sight now, and a thing of the distant past involving previous generations, makes it tough for me to judge decisively.

Anyway, it's great to have saints; we can agree on that. They show the possibilities of genuine sanctity even in our usual sinful world. They're the cream of the crop, which is beyond dispute. The typical person is mostly good or mostly bad or some other combination. Then there's some that are mostly bad through and through, usually through some fault of their own. Maybe their parents were bad, so they picked it up. Or their parents were good, but they still turned out bad. For the most part I wish bad people would fall off the edge of the earth, or let's say the earth opened up and swallowed them. Followed by reopening and emitting a burp and maybe allowing for one final scream from the victim for good measure. Bad people make me sick. Then there's saints, better than me by far in their intensity of devotion and allowing devotion to characterize them.

Of course we would want to erect a shrine to them, telling the world, "Here's what our actual ideals look like," despite our own inability (generally) to live the same sanctity. I'm forgiven daily and nightly for my many sins, going back to my childhood. I've already seen the judgment room of God, and let me tell you this much, there's no place to hide. There's literally not even one broom closet in the entire Throne Complex to hide in, not one.