My Friend D— Died in a Terrible Accident 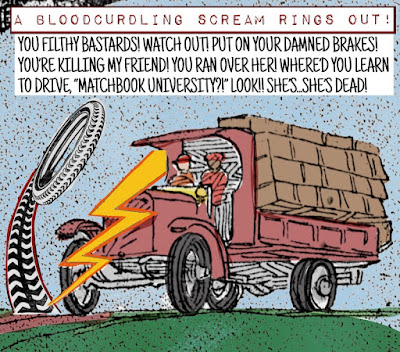 In my usual way of thinking I try to keep mortality out of my mind. I’m so used to living — it’s become a habit — I’m not thinking of dying. That said, the opposite is also true. I’m a walking precaution against dying. Like the nervous bird forever bobbing its head, watching for danger. The habit of survival. I swerve to miss a three-car pileup or sidestep a hole to not trip.

This is actually something you don’t want to think about a lot. Even if it’s not far from your mind. Because the more conscious you are of the process, the less reliably your defenses work in the background. It’s true. The more you consciously think of anything, the more you are consciously responsible. And background processes are very reliable. If we could go through life entirely unconscious and yet happy, we’d avoid the whole mess.

OK, since most of it’s delegated to unconscious processes, that leaves me consciously able to watch out for others’ safety. So I’m a warning-a-minute: “Watch out for that hole, someone’s following us, have you got your keys?," etc.

But I suddenly failed! Coming out of store with friend, D----, I turned my head for three seconds to check out the sale on bottled water, which I don't even drink, and even though I'd very recently warned her to look both ways, I let down my guard for three seconds, leading to a terrible end... When...

It wasn’t the driver’s fault. Unless the fact that he was going 45 mph in a dangerous parking lot is set at his bumper. No, despite my prior warning — was it a case of her being pigheaded? — she walked right into the truck’s path. But it couldn’t have been intentional, not the way she was protecting her sack of groceries. Clearly she meant to live at least long enough to eat a four-pack of yogurt; she didn’t mean to die before that.

Still, I can’t see any value in restricting cause and effect to the physical. There’s also the mental. She had bad habits, one of which was depending too much on me. Because I usually do give constant warnings. But you still gotta look at for yourself, Doris! What if you’d lived and I’d died? You would’ve died anyway if you couldn't wise up to danger. Did she deserve to get run over? She probably didn’t technically deserve it, but the jury’s still out on whether there was a moral verdict waiting for her to receive sooner or later. Still, who am I to dump on her? People make mistakes, they pay the piper.

It took me a couple days beating myself up to finally reconcile things; this wasn’t my fault. Get on with your life. Easy come, easy go. Another day, another dollar. Plus, I have to save my energy for the guy’s trial.

I hate to face the guy again, as much ragging on him I did. It wasn't a good picture of me, cussing him up one side and down the other. Blaming his passenger for distracting him, without evidence. And I even blamed his truck, an old fashioned model that you usually only see at garden centers, with the hood up and a bunch of flowers where the motor used to be. “What are you driving that rickety old piece of shit through the parking lot at 45 mph anyway, Stupid?!”

It took the police to calm me down. I was in a rage, lunging at the guy. And his stupid antique truck. What kind of tires are those? Model T’s?! The police calmed me down fast, Officer Rix pulling a gun and threatening to blow my brains out. He calmly explained, “Your friend was a complete klutz to get herself run over so stupidly.” Which of course I had to accept as true.

My own purchase that day was Neapolitan ice cream. Three flavors for the price of one. I meant for me and Doris to enjoy a bowl each, had only she lived. As it turned out, though, tragically, that meant two bowls for me. It’s a good way to drown your sorrows; eat more ice cream.

So ... one friend down, several friends left. Who really should listen to me more. Permit me, this is rough. ... Doris will never get another chance to do the right thing. She had to let her mind drift off who-knows-where, thinking, “I’m 100% safe, nothing can ever happen to me, my fate’s a long ways away, I’m young-ish, invulnerable-ish, I’ve got lots of plans for tomorrow,” etc. People like her are always making plans for tomorrow, completely unaware that the clutching hand of fate is already clamped tight around their neck.

But I definitely saw it. In the seconds after exiting the store and the screech of the tires and her scream, the sky was cloudy, ponderous, foreboding. But was it already too late for Doris? That’s for philosophers wiser than I to debate. She was definitely run over and by the time I got home my ice cream was softer than I like.

It made me think, God took my friend’s life to teach me an important lesson, which was probably “Look Out for Trucks,” which I already knew.
Posted by dbkundalini at 1:59 PM