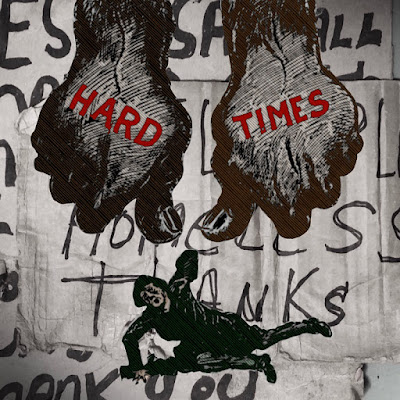 With me in the Big City, everything's getting very real. Oh boy, what an eye-opener it is, the dregs of society. And that's just me, but there's plenty of others, standing on this corner, that corner, and of course freeway ramps. I thought of doing it, but don't want to get caught encroaching on another guy's territory.

I was staking out a place one day for panhandling, more like checking it out, trying to picture how I'd look this time of the day or that time. I don't want the sun in my eyes, definitely, and the less sunburn the better. I would want everyone to see me, if not for my financial benefit, then not to be run over. But I haven't brought myself to do it yet. I'm not up on the etiquette or logistics, and a big thing with me is doing it right.

In the picture above, the handwriting is from a couple signs I found. I expect they'll be a decent model for me for composing my own stuff. Even though I'm above average in religion, I don't think the religious approach toward an effective guilt trip is the best approach. Society's so secular these days, the tried and true assumptions of long-ago need to be updated. Frankly, instead of Jesus, I'd more readily mention Buddha or Hindu yogis. Because I think Big City people appreciate a global approach; it's beyond their expectations, which would probably pay rich dividends.

And look at the handwriting, just a damned scrawl. Which, I'll give 'em this, it's more effective than an overly-produced computer printout with picture-perfect fonts. But a certain amount of neatness counts. Too sloppy and the suspicion is you're too far gone to be helped. There's a happy medium between sloppy and overdone. Especially if you had a Buddha, let's say, and your handwriting recalled the mystic look of the East without being obscure. What would be really cool would be a Hindu ochre (orangish) robe and an occasional apparently-sincere mudra. Out in the open, naturally, chest high; you're not scratching your muladhara chakra by any means!

I've been watching a bunch of YouTube videos. And I came across a bunch of anti-panhandling guys there. Who park in the lonely corners of Walmart and zoom their cameras in on panhandlers infesting those environs. Who are there so often they've worn away the grass! You can't tell me that's a good look. Anyway, the YouTubers are doing real reconnaissance, documenting the panhandlers' lives and finding that quite a number of them aren't indigent in the least. Which they hold against them.

I guess I can sort of see their point. Which is that people who pretend to be homeless or pretend to be poor could very well be making it worse for others. First, am I homeless or poor? Well, going by the technicalities. I'm technically homeless as long as my house back home is leveled and they never get it fixed. There's so much mold, mildew, backed up sewage and odor, along with vermin, parasites, rats, and the occasional fly, that a guy is easily fed up with it. When I left the last time, those weren't dry heaves.

In the Big City, yes, yes, I have a place to stay. Big damned deal. There's more to being down on your luck than whether you're homeless or not. Yet you about have to use the word homeless on your sign, because, look at the problem, you can't have a sign too complicated. I couldn't tell everything about my dismantled house. It's funny, but I myself barely look at panhandlers at all, I definitely haven't got all day to read the signs. Sheesh, it's all words, words, words, meant to create an atmosphere and push buttons, not be to be technically true, like you'd have to be in a court of law. This is where the YouTube thought-police cross the line.

Remember, I haven't panhandled at all. So if I had, of course I'd have more knowledge on the subject, what's effective and what should be avoided. And I never give anyone anything, so I haven't had extensive contacts with them. (A little, which I'll mention later.*)

But speaking as a layman, I have to think you want to come across as totally personable, kind, soft spoken, sincere, and not apparently putting the squeeze on folks. Watch the eye contact -- not too much -- and respect people's boundaries and keep them comfortable. Oh yes, this is getting me excited. I'm rubbing my hands together even now in glee at the haul I'd no doubt make! Being the nicest guy you've ever met. I believe I come across as someone without a selfish bone in his body. If I were standing at the off ramp, I'm sure you'd see me as someone doing you a favor. I'm just so intrinsically honest and pleasant, begging would make me a millionaire overnight. My pockets bulging out, a big sack like Santa Claus on my back, so full of money I'd have to hire guards to walk me home. Very soon I'd be strictly turning away all change in favor of more lightweight bills. A matter of policy.

Eventually I'd use some of the money to buy better clothes. So I'm panhandling during the day, probably an hour tops would give me enough to live well, then I'd be out at fancy restaurants at night. In my new clothes, some of the same people would see me and think I looked familiar, but there's lots of guys who look sort of like me. If they approached me in my off hours, I'd raise my hands and giving them a solid no comprende every time. Nicely, of course.

*Here's the reference to the panhandler I met when I got to the Big City. I was out scavenging soda/beer cans and cashing them in at the salvage yard. And I got a bunch of cans under bridges, right near this guy who was panhandling day after day. I'd also already met another guy in his circle, who was going to help guide me on the Shamanic Path; I called him Wolf, he called me Grandpa. So I was in the vicinity of the bridge where Wolf said he lived, but he was gone. The panhandler was letting me know where Wolf went, which was "That way." In our other meetings, he told me the direction Wolf went, "That way," and that was nice. I don't think my panhandler is rich, etc., but maybe he does go home at night to a nice place. I wouldn't begrudge him that. It'd be great.
Posted by dbkundalini at 2:02 PM