Junk Calls -- We Must Be Merciless 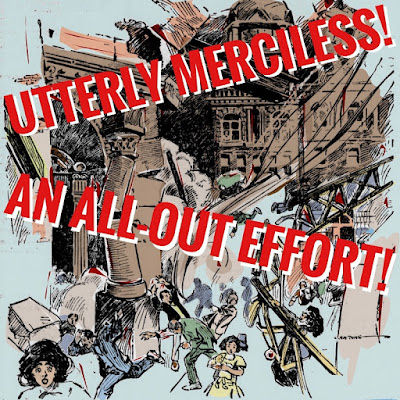 You probably saw me at one of the local parks here in the Big City, standing on a boulder, holding forth in speeches and one-on-ones with others against junk phone calls and messages. I kept going till I lost my voice, and it wasn't easy. Because some of the junk call centers knew all about it, and dropped by to plot a little revenge on me and my allies with junk calls even as we rallied. They know their time is short, but only IF...

Yes, IF... Friends, I remember when I was little, an old man took me aside and told me IF is the biggest word in the English language. That baffled my ignorant little hayseed self, leaving me entirely confused and in a daze of stymied mentality, yet trying desperately to put it together in my minced-meat state of mind, still so common yet today when new truths batter my ramparts seeking entry. The old geezer said, "Son, IF is the biggest word in the English language, because it's so hard for people to believe they have the power to accomplish anything. IF only this, IF only that ... and the motion fails for lack of a second." He went away cackling, but I pondered it...

True, true, so true. Nothing gets done, but IF we came together. Let's say we actually joined forces and did something. Say we hogtied the political forces that are against progress. Say we then hornswoggled them beyond that. Then blindfolded them and sent them to a deserted island on the north pole of Mars. Finally, at long last, we'd be able to get something done. What would it be? you're wondering. Finding a cure for cancer? Medicare for all? Humanity's hope for worldwide peace? Yes, yes, yes, all those things in good order. It'd all get done...

But first, we'd take on the junk call industry. I don't have to recount for any of you the scourge the junk call industry is to human society. You know it in all its pathetic vastness on a daily basis, with daily intimacy. We finally secured the miracle of phones for everyone, a phone in every pocket, unlimited calls with a relatively low monthly fee, messages up the wazoo for everyone. You can message someone, "W'sup?" and they know just what you mean. You're in intimate contact with everyone you want, anytime you want, no holds barred. And what do we get? Junk calls!

Well, whatever they're selling, I'm not buying. But they keep calling. You're watching TV, you're out sightseeing, you're sitting in church, you're stripped down in a sauna, and there goes your phone yet again. Someone from out-of-state, someone spoofing the area code and local prefix where they think you live, etc., all trying to cheat you out of something, and definitely screw you out of your time and energy. It's depressing. But my hope is that Society will become mean enough, bad enough, and angry enough to finally put the screws to the junk call industry once and for all. Close 'em down, and if they try to come up for air, cut off their air, and let 'em die!

Are you with me? You are, unless you're one of 'em. Tell me you're not one of 'em. But if you are with me, here's the plan: We mobilize, we tell our representatives, senators, the president, the first lady, whoever, this has to be the priority. And it can be. Remember World War II? We mobilized and made the world safe enough to have unlimited babies, the Baby Boom. Remember the Interstate Highway project? One day we decided to do it, the next week there were super highways everywhere. A week later they were clogged and needed work. But they were great that first week.

We can bring that same determination and resolve to shutting down the junk call industry, to jail the bosses, to rehabilitate our fellow citizens desperate enough to take jobs pushing their buttons, and then to burn down the entire works. Saving only a few of their evil computers and other infernal equipment in museums, explaining how humanity was attacked and yet rallied against them.

The last thing I want to get is a junk call. It rings -- oh, it's a junk call, click the button, don't take the call. But why should any of us be doing that day after day, continually, without a break? We shouldn't. Those were the calls that were supposed to be illegal all along, because it wastes your minutes. Even with unlimited minutes, it's still wasting my minutes. Shut the industry down!

If they won't shut it down for those reasons, the next thing is to treat it like an invasion of rats or the spread of the plague. With merciless combat. The plague, I don't know how we'd combat that, but we wouldn't be happy. Some of us would be standing on picnic tables, our pants legs rolled up. The rest would be carrying super-powered blast cannons, or makeshift blowtorches, doing major damage against those ugly little rodent bodies. I'd love blasting them, but I have to admit, I'd need a break; I'm seriously prone to the vertigo that comes from the same patterns over and over and the weird shifting it'd have to be with rats dashing helter-skelter everywhere.

Merciless, though, that's the key word Society needs to know. Because there's nothing beneficial to society about junk calls. Beyond the salaries the various ones get as they do their dirty work. But those who don't go to prison could find gainful employment doing something else, maybe serving as lunch ladies in middle schools. Since they're already used to a bad reputation.
Posted by dbkundalini at 12:23 PM