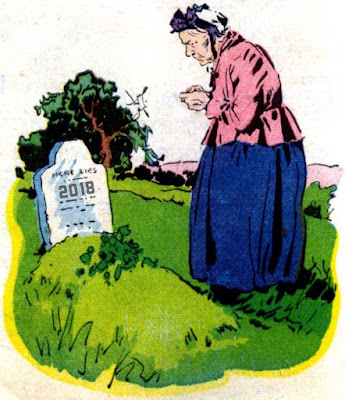 What a year 2018 was, right? It doesn’t matter who you are, we can decisively declare 2018 a year of huge ups and downs. And, if we’re not being artificially cheerful, as we so often are, not wanting to be a major downer to our friends and family, who are so sensitive and perturbed when we’re the least bit honest, which I believe is their problem, not mine, our conclusion on 2018 would have to be something like this, It was bad.

With some good in it, no doubt, don’t get me wrong. I can’t actually recall a year in my ever-lengthening life that I'd sum up as all bad; even the most dismal years, true for each of us, when it seemed like there was no up, no good, not the slightest redeeming thing about it, even then if we looked real closely, examining it with as detached an appraisal as we could muster — perhaps squinting — we could find positive aspects. But enough about 1968, am I right?

Finally, 2018 was upon us, and, frankly, there was no reason to expect much out of 2018. Once burned, twice wary, Grandma used to say. And as far as I’m concerned, I’ve been burned every year. I remember the year I broke my leg; I’ve crossed off that year. Then my arm, the same thing. But if you can make it through childhood, you feel like you can do anything. It’s a remarkable feeling! Till you become an adult and realize, it’s all the same. If it’s not your arm or leg, it’s your heart, your soul, the whole crushing weight that life itself makes you bear. The strain can be too much. But think of one of the happiest people in history, Samson chained to the pillars, straining with all his might to fulfill his last wish, to bring down the building and crush the Philistines. You could argue Samson was the last living person to have a happy new year, but he had to die in the process.

Am I optimistic about 2019? Of course I am. I'm dizzy, drunk with optimism. No less than were I standing in a beautiful meadow on a bright sunlit day, my dog also running free, able to poop without the neighbors looking to see if I picked it up. My soul even now is soaring, higher and higher, looking for the heights and hoping to exceed them. My body may be tied forever to the ground. But I can dream of jumping so high I could take wing and leave this gravity-restricted existence behind. But alas, gravity gets the tie-breaking vote, not in your favor. But just think how terrible it'd be to jump so high you were trapped in the stratosphere; the breathing there is very thin.

It is my hope that this indeed will be a happy new year, 2019. And I will keep believing that with all my heart until the first sign of turmoil touches my sensitive nature. Keep me in your thoughts... It could be any minute now.
Posted by dbkundalini at 8:00 PM