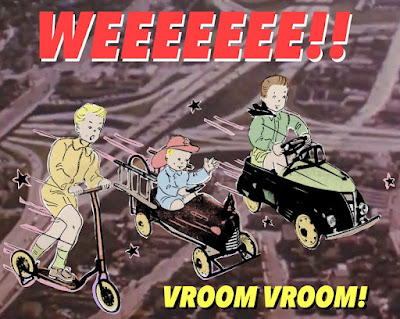 The police chasing you, how satisfying that must be!

It turns out there’s not much to do in my golden years. Yes, life's always complicated and a mess in certain ways. Grandma’s house was completely dismantled and carted off to the dump. The insurance is supposed to cover the damages, as long as I'm not found responsible for the bacteria getting a foothold, which later multiplied and consumed the place. In the meantime, I’m holed up in the Big City, trying my best to survive until the verdict. It’s a good life.

One of the things that makes my golden years more satisfying is my daily rendezvous with the seamier side of YouTube. Yes, I’m talking about police chase videos. I used to watch them occasionally on TV when they were live. But those were the local channels and local chases, only a few. Now I've got the world and many chases at my fingertips. So I'm glued to YouTube, rooting not only for the police but to a certain extent the bad guys. If he or she could only prolong the madness, so much nicer for me...

Of course I myself would never be involved in a police chase. All such crazy mistakes are totally beyond anything I'd do. Those people snapped. I don’t snap, I barely stretch. Really, I maintain something like a 3D omniscient perspective on what I could ever do, and knowing those limits, I don’t snap. If you ever hear of me doing something like that, read it again, it's someone else. One of these days I’m going to my grave, of course, but it won’t be from a chase on the freeway or the cops gunning me down when I'm trapped at a dead end.

That said, it's so extremely interesting that others aren’t as reserved. And that they have no restraint whatsoever when it comes to their personal safety, reputation, future, the law, and concern for others. How I was ever lucky enough in the wide time-frame of existence to be born into a world that would invent the internet and allow for YouTube and endless videos, I’ll never know. Big praise for whatever is Good, Eternal, and Ultimate out there, because I’m daily entertained by a never ending parade of total losers and schmucks.

In the last few days I’ve seen a man eluding the police for probably 20 minutes, a journey that eventually took him off the road and across various fields. Finally, he abandoned his vehicle and made his way into a river, in which he waded as best as he could. Then he was climbing on the bank, slipping in the mud. He was surrounded, but instead of wisely surrendering — all hope was lost — he optimistically persevered, stripping off the waterlogged rags that bound him. Until, if memory serves, he was mostly nude and still striving to slip and slide his escape, though he was only about five feet in front of the law. They captured him, duh. How do you spell D-U-M-B?

As alluded to above, there was another guy who starred in his own police chase, but lacked the foresight to not get trapped in a dead end cul-de-sac parking lot affair. But did he give up peacefully when every shred of hope was lost? Hell no! He had a truck eight feet wide and thought he might barrel it through a five foot gap between the police and a fence. Which meant it was his day to die, a very stupid death, no tears, no last rites. I did make a mental reminder, If I’m ever that stupid (and I won’t be), dear officers, aim for the heart!

The last chase I saw yesterday was mostly dismal, just another arguably mad woman on the interstate. It wasn’t memorable enough in and of itself to remember everything clearly, just more sheer stupidity run amok. I do remember when watching it that I was actually critical of the police, not understanding the method to their apparent madness. They kept surrounding the alleged perp, then pulling back. Which later looked like it was meant to give her the confidence of escape every time she had one apparent path of survival. So when she approached six lanes of the road with backed up traffic and one lane with a police car and the next lane open with a spike strip in it, the only close thing between her and precious freedom, she took it. (There were open lanes farther to the right, but she ignored those.)

Damn that mistake! Part of me wanted her to keep going, but most of me wanted it to end. Because these people are monumentally stupid and dangerous to others, they may as well be stopped. But she hit the spike strip, then was riding on the rims the rest of the way. She was quickly nabbed in a parking lot, unceremoniously captured, never to be heard from again.

It’d be a better world if people wouldn’t take their lives into their own hands like that, and of course if they weren’t endangering the rest of society. But I have no say on whether they do or not. Guys and gals, if they’ve been doing it till now, are likely to keep going ballistic, then ending up in complete and total trouble. I don’t know how they ever live it down. Any theories? I don’t know how they’re able to cope socially from that point on. They surely lose their license, but maybe it doesn’t matter. They didn’t follow the law before, why would they now?

As long as people go ballistic, I’ll be sitting here watching them, shaking my head, and saying to myself, “How can they be so stupid?” I’m also a little critical of the police, since with my superior brain I naturally always know better and can't believe it takes them so long to catch these perps. Do we not have the atomic bomb? Why should they live another stinking day?
Posted by dbkundalini at 11:07 AM