Happy Halloween, Thanks To A Payday Loan 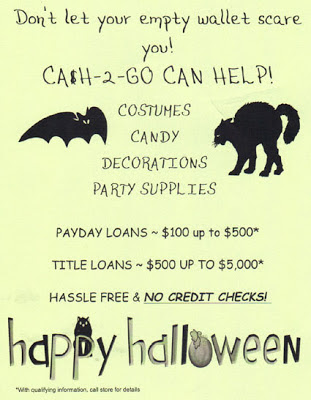 We want everyone to have a Happy Halloween, which should go without saying. But of course there's always a few folks who won't be able to, due to the bad economy, or perhaps just because they're naturally poor.

Everyone's story's a little different; people's situations and circumstances vary, so you're likely to see anything. There's folks who are filthy rich, easily able to afford to hand out entire boxes of Whitman samplers to Trick or Treaters. Then there's medium-wealthy folks, going for the premium chocolates, only not by the entire box. A larger group is the middle class, giving away decent enough candy, but strictly limiting it, to say maybe one or two candy bars. You go on and people get progressively poorer, all the way down to the folks who steal apples just to have something, anything to hand out. Then worse, those who are so dirt poor, they not only don't give anything, they steal from the kids when their backs are turned!

In there somewhere, probably with the dirt poor and the apple stealers, you have a few well-intentioned folks, who really feel the embarrassment of poverty, and the shame that is theirs that they can't participate fully in the holiday. So kids egg their house, or tent, or what have you. Halloween can be a very dangerous holiday when you have disappointed kids. I remember when I was young. There was a couple of old folks. Their excuse was they lived on a "fixed income." So the old wife made this crap that we hated, called "Divinity." Big mistake.

So me and some of the bigger kids cut down a telephone pole, and muscling it as a gang with quite a bit of force, drove it right through their front door like a battering ram. Our momentum was so fierce we went right through the opposite wall, leaving their place a shambles. One or both of the old folks later committed suicide in their garage. And the story doesn't end there. Later some other people moved in, and I don't know what it was -- the bad vibe? the karma? the possibility that it was haunted? -- but the husband of the later couple also committed suicide in the same garage.

Obviously, it's important to get Halloween right. And now, finally, poverty isn't an excuse. Because you can take out a payday loan, or get a title loan on your car, to make Halloween as good as it should be! I got the flier above in the mail today, and I thought, Finally! What great news! If you need a costume, they've got money to lend. Or candy, decorations, and party supplies, they've got you covered. With payday loans up to $500.

Yes, you can get a good start doing Halloween right for $500. Although if you want to get one of the deluxe Kiss costumes, they're actually $499.95, so that might not be the costume you'd get. For that you'd probably need to take in the title of your car, because you could get up to $5,000, which naturally would be enough to cover quite a bit more celebration. Sure, your car's in hock, and you'll play hell getting it out with what are presumably fairly high interest rates, but at least you'll have the fun of that one day. If you're really lucky, or really diligent, you might get it paid off just in time for a new loan next year!

But just imagine, you really could have quite a bit of fun. A genuine Batman costume is also $499.95. Get one of those, a few Kiss costumes, a bunch of big tombstones for your yard, and some of the expensive animated ghouls that jump out of their caskets, plus candy, etc., etc., and you'll be the hit of the block. What kid wouldn't love you! Of course it's also nice to have a car, but as trade-offs go, giving up your car for a decent Halloween, it's a no-brainer.

Don't let your empty wallet scare you! Have a Happy Halloween!
Posted by dbkundalini at 9:38 PM