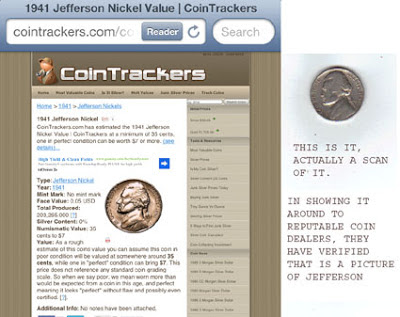 Somehow -- I don't want to give away too much about how I got it -- I came across a valuable old coin, a 1941 Jefferson nickel. I had change in my pocket, I emptied it out, and there it was, a genuine 1941 old coin, just like that. I didn't do a single thing, knowingly or unknowingly, to end up with it!

Before I got it I was feeling perfectly normal. After discovering it I pulled down the shades and started googling it. According to a site called "Cointrackers," there were hundreds of millions of these made. But since it's from 1941, there aren't a lot of them left in circulation.

As to the coin's value, the Cointrackers site said it ranges from 35 cents to $7.00, which is a damned lot for a nickel. $7.00! Meaning, I wasn't going to put it in a parking meter. And actually, except for this blog post, I wasn't even flashing it around willy-nilly. Only to certain people who could be trusted.

I took it around to some of the coin shops of my town. I moved all my ordinary change over to my left pocket and kept the '41 nickel alone in my right pocket. I went to Todd's Used Coins first. Todd was out for lunch, but the girl at the counter, taking a quick look at the nickel, immediately paged him, and he came right over. He looked at it, verifying for me that it was indeed a 1941 nickel, and that the visage on its face was a picture of Thomas Jefferson. He looked it up in a book, then wrote a number on a slip of paper and passed it to me. I looked and he had made me an offer of 25 cents.

I thanked Todd for his time but went on. Another place, right next door, is called the Universal Coin Emporium, or U.C.E. I went in and the owner -- the oldest guy in the shop -- met me. I asked if I could share my find with him, and he was amenable to it. He was very nice, in fact. He asked if it would be better to have a small black cloth for a background, which he provided. The nickel looked great on the cloth.

He said, "Ahhh, yes," in a very satisfied way, and checked it out carefully, front and back. He also was able to verify its province in time and place, that it was an American coin, to be precise a nickel, from 1941, with Jefferson's visage on one side. He pulled down a coin guide off the shelf and referred to it, announcing that the "tails" side was a building having to do with Jefferson called "Monticello." It looks like it has a dome on it. Very curious!

This guy -- I didn't catch his name and he didn't say -- offered me 75 cents for it, American money. I thought, you know, that's definitely a step in the right direction, but far from 7 bucks. On the other hand, he said, being a coin shop, he's buying things for resale, so he needs to make a profit. Anyway, he said, he would probably price it at $5.00, because there's some wear, and it might take him a while to sell it. When I turned down his offer, he said he might go $1.25, but not a penny more.

I wrapped it up in the black cloth and left, wanting to try one more place. A place called Dick's Coins, "If It's Money, We Want It!" emblazoned on his window, door, and even a bumper sticker on the car out front. Dick was very busy and really couldn't be bothered. But still, after I waited for an hour, making myself very conspicuous, through a lot of heavy sighing and tapping my watch, he made time for me. He came over and was very nice, "Let me see the damned thing..." He looked at it, and acted like they were a dime a dozen, to coin a phrase, and tossed it back at me.

I went slinking back to the guy at the Emporium, proudly, and told him I'd take the $1.25. And he was happy to pay it. I asked for the payment in coins, hoping to score another collectible, but they all turned out to be regular 2010-12 quarters. Nothing valuable. But enough for a couple cans of soda, pretty good for a nickel!
Posted by dbkundalini at 7:43 AM