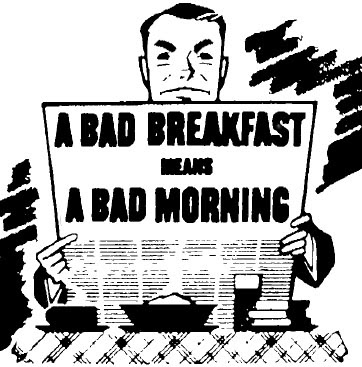 You know me, I'm never one to complain. I've done pretty good keeping it in. But there comes a time when even I -- I, with the patience of Job -- finally have to say enough is enough.

I am getting very frustrated, very tired, and frankly very put out with certain restaurants. Of course I'm talking about the ones that never seem to have enough food on hand, so that they have to make multiple runs to the grocery store while you're sitting there waiting.

The meal that I really notice it happening most egregiously is breakfast. Whether they simply have no faith anyone's going to come to their place the next day, or whatever it is, it's getting increasingly frustrating for me to be sitting there waiting for breakfast, only to have them running out of food. And the worst part is they try to conceal it, meaning you have to wait even longer in apparent ignorance.

There's a few places where this doesn't happen, of course, usually the more established chain restaurants. It's always the local places, where no one's buying in bulk, and where they're more or less scrimping by. But in my opinion all they're doing by the penny-pinching and/or lack of planning for the next day is only driving customers away. I for one am about finished...

This became a serious problem for me at a restaurant that's a very cool restaurant, at least in appearance. They have a real nice, quiet atmosphere, mainly, it seems, because other people must be fed up with the poor service. But we still go there occasionally, always thinking maybe they will have learned their lesson. We've been there three times in the last month or so. Will I never learn?

A couple times back, I made a terrible mistake: I ordered a small orange juice. I wasn't thinking anything about it, assuming they'd have enough juice to cover a small order. But no! They brought the juice to me, which had obviously started out a few dribbles in the bottom of a pitcher, but then was watered down sufficiently to mostly fill my glass. I called the waitress over and complained, which I'm not one to do. A half hour later, literally a half hour, she came back with a fresh glass. In the meantime, who knows what had happened back there! Someone had to go out for new juice!

The next time, it was more than that. The menu had a few things crossed out, things they couldn't make real fast, along with prices changed with little scraps of masking tape, like they were updating them constantly depending on whether the grocery store had sales going on. Naturally I didn't order orange juice. I figured coffee would be safe, and bacon seemed like something they'd have in stock, and eggs. My companion had pancakes and a fruit cup.

We got our coffee right away, and I thought, Magnifique! Then it was only a matter of getting our food. Which, unfortunately, turned out to be, as they say, easier said than done. As we waited, my companion tapping his watch, the waitress was a no-show.

After a while, since I was getting cold, I went out to the car to get my jacket. The place must be behind on paying their heat bill, too. While there, I looked up and -- what?! -- the waitress, the manager, and apparently a couple of cooks, two guys in tall white hats, were coming quickly around the corner with a full shopping cart. They pushed it around back.

I returned to the table and told my companion what was going on. He shook his head in disbelief. Then 15 minutes later, here comes our food, the waitress only moderately out of breath. She apologized for the inconvenience and told us there had been a problem with the humidity, so the cook was having trouble getting the eggs right, sunny side up. Very flimsy excuse. But she'd take the coffee off the bill.

In the end, I decided to just mess with her. I asked for Tabasco. She looked at me in disbelief, turned rapidly, and ran out the front door.
Posted by dbkundalini at 5:41 PM