I Could've Been A Pilot 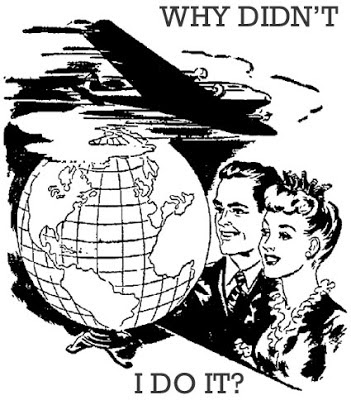 Twenty minutes ago I was taking my dog Underbrush out for her final pee of the night. It's a clear night, and I always look up, hoping to see whatever stars happen to be out. Tonight, though, my eye was captured by a crystal clear plane going from one side of the sky to the other, lights blinking. He was doing it right.

Looking up at that beautiful craft, as I did, I felt a lot of emotions surging in my psyche. I had the emotion of relief, for one, that I am smart enough to realize it's just a plane and not a UFO. For had it been a UFO, that would've been awful. But the bigger emotion I had was one of wistfulness for the past, and all I could've been.

Seriously, it never occurred to me when I was a kid that I might be a pilot. Not once. And I was a kid who slept in the southeastern bedroom, the same direction of the airport here, where I saw the green and white lights flashing through the sky every night. I was always thinking of the airport, even though it was just a local airport and not anything major.

Now, though, that I'm grown up, and more naturally given to wistfulness about what might have been -- I'm rich in regrets -- I'm thinking, Why didn't I go into the piloting business? How cool it would have been to be jetting across the country with a front row seat on the destination. I'd be walking through an airport with my co-pilot, in a nice suit, with a carry-on bag, heading for the exit, ready to go cross country. And I would never have been like some of the bad eggs you hear of, guys who try to fly drunk. That's reprehensible to me in every way!

But what would it have taken? 1) Ambition to do it; 2) Applying myself to get the right education; 3) Then going for it! That's basically it. (Heck, had I been a pilot I would've been retiring right about now, since it is almost my 60th birthday. I believe I heard that pilots (jet airliner pilots) have to retire around 60.) But how great would those years have been. Instead of sitting here, basically vegetating in my grandparents' old house. Nursing along my game toe, from an accident that likely wouldn't have happened had I been a pilot.

That's not to say pilots don't have accidents. Some of the worst accidents in history have been caused by pilot error. The whole plane goes down. You crash in the mountains, or you crash at sea. Everyone dies, including you. There's a whole investigation, and very possibly your name and memory are mud. I was in a waiting room one time with an ex-pilot, true story. He told me a story of himself somehow missing the runway, or overshooting the runway, with the plane then going nose down or off to the side somehow. And with that one little accident he was out of a job. Smacking a mountain, if you survive, multiplies the penalty.

Still, I've been pretty lucky. I haven't had real bad luck. So I probably would've been a successful pilot, had I only done it. By now I would've been an expert in the various facts of aerodynamics. But now it's never going to happen, that's for sure. Too much time has slipped by. And so ... here I stand in my back yard with a pissing dog, watching other guys fly by. It's sad.
Posted by dbkundalini at 9:25 PM