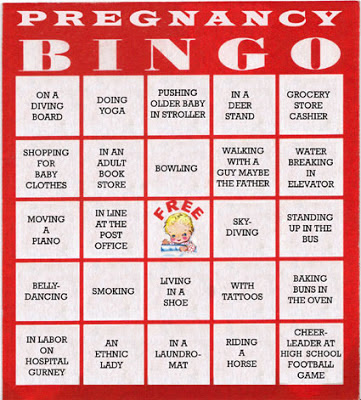 It's not extremely rare these days to see a pregnant woman. Not like the old days, when you had no idea where babies came from. It was all very hidden then, with long visits to aunts and staying inside behind dark shades.

I still think, even with the relatively frequent pregnancies you see, that there seems to be a lot more people born. So I'm guessing there's still a lot of confinement going on. And other ways of concealed carrying, like with tight clothes ... or very loose.

I mentioned the old days. Going back to that time, it was always worth a comment when you saw someone pregnant. Grandpa had a stock phrase for it, "Someone's been sleeping with a bull." Which was a strange comment for the imagination of us kids.

But these days, living as we do in our "Anything Goes" world -- with a lot of the common decencies of the old world now passe -- you not only see pregnant women, they've taken to normal activities! No more sneaking around to avoid rude comments and raised judgmental eyebrows.

From my own single, limited perspective, I see them around my town, meaning there has to be tons more out there, in towns and cities, doing heavens knows what. Just locally, I've seen them in pizza places, in the park, at the dog show, at parades, in church (!), and at the library, you name it!

I made up a little Bingo game for myself, just to see how I'd do in seeing them various places. I made it both easy and a little challenging. Like Sudoku, I don't want it too easy and I don't want it impossible.

Some of them are going to be very tough, like "standing up in the bus," since I hardly ever ride the bus, and no one else does either, so they're not standing much. Some of them will be very easy, like "pushing an older baby in a stroller," since where better to look? If they crossed the line once recently, recidivism is to be expected.

Again, I don't go to many high school football games, so the chances of seeing a pregnant cheerleader at a football game aren't great. For this I might need to rely on hearsay from the older town guys at the coffee shop. They've all had season tickets since the '50s. And hanging out at an adult bookstore isn't my normal activity, but it might be worth a few visits just to satisfy my curiosity ... about how many pregnancies there would be. Where would you expect more? It's all they're thinking of.

A few of the categories point to some of the more unpleasant aspects of our modern world, like, "Walking with a guy maybe the father." This one might be tough to verify, depending perhaps on how close they are to the adult bookstore. Farther away, it might be the dad. Closer, it could be anyone. Or "smoking." Smoking while pregnant was more common when I was a kid -- I still have a secondhand cough. But these days it's actually looked down on.

It shouldn't be hard to find a pregnant woman in line at the post office. Since they have ten lines and one guy working, when I go in for a stamp it takes all day. That'll give me a lot of time for a pregnant woman to show up.
Posted by dbkundalini at 12:36 PM