A Shoutout From The President 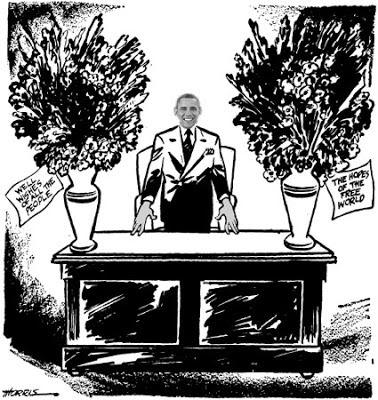 Today was the inauguration of President Barack Obama for his second term. It was a wonderful display of patriotism, optimism, and hope. And I'm sure I join with freedom-loving men everywhere when I say, It was sure a lot better seeing this man of integrity taking office than the opposite nightmare of seeing Mitt Romney up there. Good God, alternate history can be so terrifying!

I felt my heart fill up with emotion as I saw the inspiring pomp of our dear country joining in the ceremony honoring our great president's second term. I can only hope that his vision for America is able to carry the day, over the intransigence of a Republican party so far off the beam as to be considered completely derelict. The downer of the event, if there had to be one, had to be the sight of John Boehner, Eric Cantor, and Paul Ryan, followed up by the close second of Bob Schieffer's pathetic commentary, the CBS veteran quite unabashedly shitting in the punchbowl of joy.

Everything else, from the wonderful singers to the great, pensive poet, to the president himself, in a stirring oration, was great. It renewed my faith, not only in America itself, our past and our future, but in humanity itself. It's just such a shame, in the light of renewal, that we still had to see a parade of Republicans pretending to make nice. They are truly a scurrilous bunch, even though Lamar Alexander managed somehow to hold his poison tongue. I held my breath and wished real hard, getting my wish.

Kelly Clarkson was very cute. I had to think, What a long journey she's had since her introduction at the auditions of American Idol to this magical moment! That was back when I watched AI, which I did up until they allowed Kris Allen to win over the much greater Adam Lambert. When I said I would quit watching the show in protest, I meant exactly what I said!

But the heart of the inauguration had to be the president's speech. In my opinion, it was a well-honed address, and despite Bob Schieffer passing gas to the contrary, it was a home run in every sense of the word. He mentioned the things that matter most to me: Equal rights for all and opportunity. But shame on the Republicans for failing to applaud. (I'm assuming they failed to applaud, since they weren't on camera and we couldn't see them.)

Finally, the greatest moment for me personally had to be President Obama's shoutout to me, a financial contributor to the campaign: "I've looked to the mountaintop. And I want to send a shoutout to D.B. Kundalini, the great blogger at my favorite blog, grandmaslump.com. It was because of his contributions, every penny he earned from Google ads as well as all he could spare from his disability pay, he having a game toe, that I am able to stand here today."

When I heard that, I happened to be eating an ice cream cone. And I snorted some of it right up my nose in shock. Pretty soon the phone rang and it was Wolf Blitzer, asking me how it felt to get that honor. I said, "It was delicious." Wolf said, "Delicious?" Then I explained about the ice cream, and that I had it on DVR, and would watch it again and again, every time I had ice cream.
Posted by dbkundalini at 12:57 PM