You Could Be A Sleep Therapist 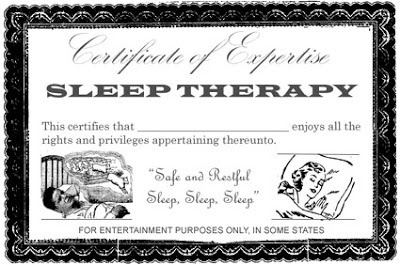 The other night, in that weird twilight zone right before falling asleep, I thought of something that would make a very good occupation, and an easy one at that, Sleep Therapy. It was such a good idea that I was immediately wide awake for another three hours.

There I was, burning the midnight oil, charting it out: How hard could it be? I've been sleeping all my life; I've had eight hours a day experience all my life, but sometimes less if the neighbors are having a party. I hate to sound like I'm making what seem like facile arguments, but you have to admit it's a hell of a point. All that, along with the native talent I've generally had in anything I put my mind to.

Someone comes in. I probe them for their sleep experiences. "Are there times when you were still conscious? That was the state of wakefulness. Were you ever unconscious? That was the state of sleep. How much did you have of one? How much of the other? Let's split the difference, you go to sleep and everyone wins. Do you remember anything like weird movies, picturing yourself in settings with aspects of reality and aspects of fantasy, all the while seeming very plausible to you while later being hard to understand, remember, or describe? Me, too, isn't that the damnest thing! What do you think that was?"

Or they're going, "I'm having a hard time sleeping." This calls for wisdom, giving the best advice you can come up with. I might say, "Let your mind drift, leave your problems behind, picture yourself on a bed, sleeping, sleeping, sleeping..." Basically, I'm hypnotizing them, then pelting them with mini marshmallows to make sure they're not faking it.

Or if they're saying, "I'm getting way too much sleep," that also calls for wisdom. My own theory is you can't sleep too much, a good round eight hours is plenty. Or something like that. But if they persist, complaining they're getting too much sleep, the answer is simple, stay awake more. "Use some mind control techniques: Imagine terrible things happening to you if you sleep, the house burning down, thieves breaking in, an NRA convention somewhere in town. And if you still find yourself dozing, wake up after eight hours and everything's solved."

Let's say you've decided to become a sleep therapist after reading this blog. Congratulations, you've finally embarked on a path toward social usefulness, because sleep is right up there, more or less essential to everyone. I would say that about all you'll need to do now is rent an office, hire a receptionist, get a phone, a patient's chair and bed, print the certificate, and you're done. And maybe a frame for the certificate. This has been a pass-fail course, and you've all passed!
Posted by dbkundalini at 6:35 PM