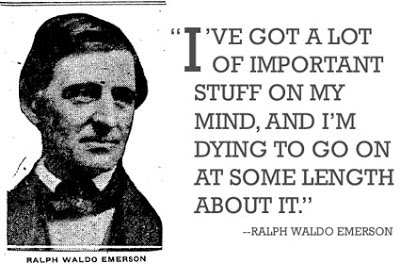 “Finish each day and be done with it. You have done what you could. Some blunders and absurdities no doubt crept in; forget them as soon as you can. Tomorrow is a new day. You shall begin it serenely and with too high a spirit to be encumbered with your old nonsense.” ― Ralph Waldo Emerson

So there you have it, the first word of the New Year goes to a famous thinker of long ago, Ralph Waldo Emerson.

I always like the idea of the New Year getting off to a profound start. You shouldn't just blurt out any old crap, especially on a blog like this. It needs to be classy, like when you land on the moon. The first thing should be something major.

And who better -- unless it'd be Whittier -- than Emerson? Who always had profound things to say, and he was able to say them in a 19th century way much better than I could ever manage. I actually know this, because I've started to read his essays at least 20 times. I get up to about page 12 and that's it till next time! So what little I might know about it in terms of content, I make up in my absolute knowledge that it's profound and hard to understand. Emerson has philosophical authority up the gazoot chute, forward and back.

Now, though, that the first word for the New Year has been given, and you've had some time to ruminate over it, I can write anything. First, however, I'm a little embarrassed, I haven't actually read the quote! Seriously! I googled his quotes and this was the first fairly lengthy one. I was thinking, the bigger the quote the less I myself have to write.

So let's see what it says. "Finish each day and be done with it." Maybe not a great first word, since he's talking about the end of the day and not the start. "You have done what you could." How true, how true. Emerson isn't expecting perfection, just do what you can. I need that, because it's in my nature to appear the coolest guy in the room, when, realistically, I'm not. "Some blunders and absurdities no doubt crept in." I can relate to that easily, big blunders, massive absurdities. "Forget them as soon as you can." Done!

This is pretty good progress I'm making! If I'm not mistaken, I think I halfway understood that quote. Maybe I'm just about smart enough to try and muddle through one of his essays again. Later in the year, if I'm not doing anything else.
Posted by dbkundalini at 1:28 PM