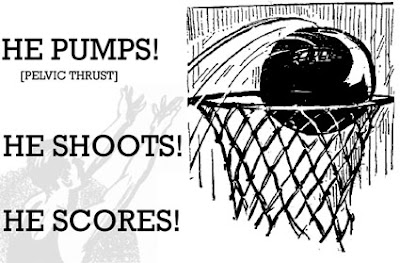 I'm a victim of March Madness this year! Watching basketball. Not all of it, but a bunch. I should say, the phrase March Madness is a trademark of the NCAA, as is March Mayhem, Final Four, and maybe the Big Dance, and who knows what all else.

And after I get this blog done, maybe Punish The Coach will be a trademark, too, because I believe it would be super popular.

The coach, as everyone knows, is the man in charge. He's the one who's taken a bunch of rough-cut know-nothing guys and introduced them to basketball. He's shown them the ball and explained to them what it is. They've learned the basics from his hands and lips, that it rolls, bounces, flies, and goes through circular things called hoops, then through net-like things called nets. After the basics, it's on to the advanced stuff, like the court, the various lines on the floor, and the rules of the game.

Having learned all that, it's time to form a team and chalk up some victories. The way I understand it, by the time they're allowed into the NCAA Tournament, they have proven themselves on the court in something called the regular season. It appears the criteria for admission is to win more games than they lose, then they apply another factor, the quality of their opposition. If they've got all their dunks in a row, they're in.

Now it's time to win or lose in the tournament. And lose they do! In fact, any rational survey of the situation has to conclude that they're nearly all losers. Only one team makes it through the tournament unscathed. The others have signed up more or less for a completely predictable loss. They're putting themselves through all the agony (which is up to 99% assured) for the rarest of chances that they'll win.

My proposal is, if they lose, as most of them must, we should let the coach experience some of the anguish. As the representative of the team, the head, he must submit to the worst rigors.

OK, we'll leave the last two teams, those in the championship game, aside for a moment. (The last losing coach will face his rigors just prior to the winning team getting their trophy). So this means we have 66 teams who have already lost. At halftime of the final game, we want to bring the 66 coaches out, and have them submit to punishment. Obviously they've done something very wrong that their teams haven't won, although, yes, it's assured that all but one will win.

We line them up by first out, with statistics of the game governing final placement. Then it's on to the festivities, dunk tanks, pie throwing, children pelting them with Nerf balls, and rotten tomatoes. It's a gentler form of what we see in mythology, in tribal societies who are concerned about fertility and crops, the death of the king. I can see that coaches would love to do it, because it might just work, swaying the gods to give them a more fruitful season next year.

The next-to-last division is only 15, to account for the 1 we added to the Sweet 16. They get a laurel sprig and a kiss from whoever's left. The last four teams of the 68 in last place, the coaches of the teams, get to sniff a laurel sprig, and look at whoever's left. Plus a kick in the ass.
Posted by dbkundalini at 1:38 PM