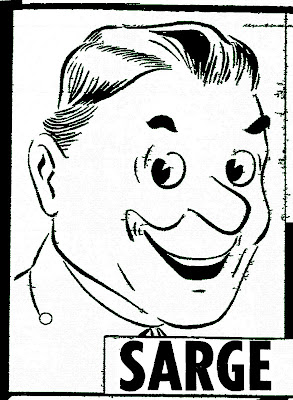 I wrote about Sarge a couple times already. Once a little over a year ago. And a second time, toward the end of last year. He's a great guy, and in my humble opinion it's guys like this that give the military a good name and make me want to stand up and salute. Honestly, I'd rather see a one single ex-military humble handyman tinkering with broken stuff in my garage than a thousand old guys on top of green trucks rolling down the road at the July 4th parade to wild acclaim.

Another name for Sarge is Walt. But Sarge is good, since it tells something of the guy, that he was able to ascend all the ranks to sergeant. I'm not sure how high that is, but I'm thinking it's pretty far. Mostly what I know about the service is what I remember from Gomer Pyle, that one guy comes in and is a private the whole series and one guy's already there and he's a sergeant the whole time.

But what happened with my Sarge is different from Sgt. Carter, in that he had to serve overseas in a war, namely Vietnam. It's hard now to realize what kind of turmoil we were in when it came to Vietnam. I suppose it was similar to Iraq and Afghanistan, at least in length, but the big difference was that the people back home here really cared about it. To the point of going ballistic. Those were my formative years, so I pretty much stayed on the sidelines and thought about other things.

OK, here's the set-up ... Once again I needed a handyman. For something I saw on Pinterest, basically baby food jars with the lids nailed to a board, then they hang down and you put nails in them, and twist them back to the lid when you don't need them. Damn! This seemed like the kind of thing I should be able to do on my own. It's just a farking nail! But every time I tried it, the nail either went through the board at the top, being too long, or wouldn't hold the lid because it was too short. Then I was messing up too many boards and too many lids (I traded a half dozen Easter bunnies for a box of baby food jars.)

Anyway, to cut it short, I called Sarge, who hightailed it over. He took one look at my mess and said, "Screw it!" I go, "What?!" And he explained, you need to use screws; even if they're short they'll still hold, and they won't poke through the board. Then he did it for me and now I have a nice display, a bunch of jars full of nails I'll never need ... since screws are really what I needed.

"I was a Sarge at a desk. It was a day very much like today, sunny and nice. We had so many dipshits in our outfit, spaced out, stoned half the time, out of their F-ing minds the rest. Me and a couple other guys were the only guys I could trust. Anyway, these dipshits had to keep coming in my office for something, paperwork, and none of them had any discipline or any sense. This is why we lost the war, drugs. Well, I had to protect myself against our own guys the best way I could. So I put a gun up under my desk, screwed it up there a lot like I just now screwed in your baby food jars." I had to smile, he hadn't lost the touch! And it's great he had that experience in the war that later had real life benefits!

"So, anyway, one day in comes this crazy guy, one of the biggest nuts, the biggest losers we had. So screwed up! An ugly guy, too. Butt ugly. And out of his F-ing gourd! Shake him, you'd hear the seeds. He comes in, I don't know what for, but he busted through the door and yanked the chair out of his way and looked at me like bloody murder -- daggers in his eyes. I was a dead man. He was coming up over the desk and I usually kept my finger on that gun but didn't shoot it too often ... mostly just to keep the action loose. This time, Jesus, I haven't thought of this in years! [I didn't contradict him here, that he'd told the story to me several times in the last one year plus.] That F-ing gun went off and blew the guy's crotch all to hell... There was dead silence. The guy's face goes from berserk to the face of a helpless baby. He backs up and smashes against the door and falls to the floor..."

Wow, that's exciting. Sarge was laughing, and I was laughing. "The face of a helpless baby ... You don't mess with me!" he says, a lot of his old strength returning to the fore. I said, "That's right, that F-ing guy got what he deserved! Chitty chitty bang bang!" What a story!

Sometimes I wonder if that crazy guy's still out there, now mellowed out, but even after these years, nothing down there... That'd be a weird feeling, just a bunch of tissue, whatever they could save, all sewn together and stitched to his legs. Would be rough.
Posted by dbkundalini at 4:30 PM