Preemie Gulch -- A Town of Preemies 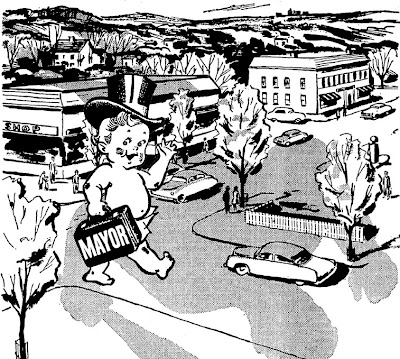 What a cool alternate reality, if you're into this kind of thing. Especially wonderful for anyone's ever felt a persistent, nagging desire to be early for things. Which I guess I've had plenty of times, since being late, in my opinion, isn't good.

I heard of this place from a guy, and I'm certain it exists, like fairies and Brigadoon. Somehow, like everything else in the fertile mind of man, this also came to be. He told me he was born a preemie, so he hates being late. As for the rest of his story, and maybe mine, I'm filling in the blanks as quickly as I can, since I'd rather get done early than late.

We all know what a preemie is, of course, especially my mother readers, mothers who have had to go through all the prenatal aspects of nature before finally delivering their little rug rats. A preemie is the kid who'd rather come prematurely, early, not honoring his or her in utero lease for the full nine months.

The place we're talking about is a wonderful version of paradise, called Preemie Gulch. Like other utopian visions, it was thought up by people who were preemies, and have carried through on preemie values. Of course the whole thing had been imagined many times, but for someone to actually carry through and establish the place, that took something special.

At Preemie Gulch, the guy told me, they do many things a month in advance. Like filing taxes. I've known plenty of people who file in January, but mostly because they're looking for a refund. In Preemie Gulch, since everyone is so industrious, never letting anything slide till it's too late to benefit, they don't get refunds, they pay. But they still file a month in advance.

As you might've guessed, everything about their schedule is way ahead. School officially starts at 9:00 but their kids are there at 7. Happy Hour is 3, they're lined up at 1. Even TV is different. The late-late show is at 8 p.m. They don't dare have Daylight Savings Time or they'd be up all night!

That's basically the main preemie value behind Preemie Gulch's existence. They were constantly frustrated with the outside world, the rest of us who show up on time or even late. I know I've even been frustrated by that, even though I'm not a preemie, that I know of. I could ask my mom, but I surely wasn't; I was 8 pounds something and preemies are usually under 4; and to this day I like warmth; I get bundled up in a blanket, I can't be budged; I can't believe I would ever give up my lease a minute early. Still, it's frustrating, wherever you are, when people show up late. If it bothers me, think of what an actual preemie thinks!

So in Preemie Gulch they do everything on the Early Bird principle. That's even the name of the school team, the Early Birds, seriously. For the girls, the Lady Early Birds. They have early bird specials in their stores, etc. If someone has a garage sale at 8 a.m., that's just so no one will show up before 5. By 8:00 the whole thing's over. There's so much early birding, worms don't stand a chance.

But here's an example of how everyone being early can have negative consequences: The houses in Preemie Gulch are very nice. The basements are always finished and done so in the greatest way. Because everyone wants to move in early, before the place is built. They simply can't wait. Although the carpenters aren't slow to build. In fact, they usually start building before they even get the blueprints, simply because waiting is so hard.

This doesn't always happen, because the guys in charge of blueprints usually have the blueprints done before they even know what the people want. Although the people aren't slow about making their wishes known, since they're normally at the blueprint place a few days before their appointment. Then, naturally, you have blueprint guys who are upset that they weren't there early enough for them to start earlier. It goes like that. The most extreme consequence is the house is built and decrepit before the eventual owners are even born.

They're like us in school stuff. They start kids in preschool before school. But the drop-out rate is very bad because no one wants to wait till graduation.

Everything's on a breakneck pace ... in reverse, as you can see. If you can postdate your plans, get started before you're ready, and map out your future before you know what you're doing, you're that much further ahead. Whew! Why put off till tomorrow what you could have done yesterday?

It's becoming somewhat dystopian, my description of the place, although it's truly a paradise.

Point for Discussion: What would happen to Preemie Gulch if the babies born there weren't preemies? Say, in four generations.
Posted by dbkundalini at 4:27 PM