The Mustang's Killing Us 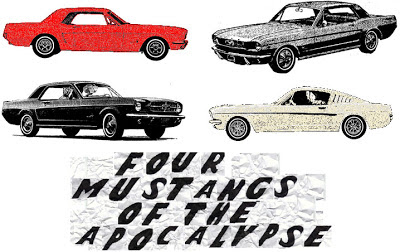 Not to pick on the Ford Mustang, exactly... It's the representative car, that's all. That's killing us.

I've never had a Mustang, although certainly I wanted one, like every other brainwashed American male. In fact, I wanted one till just recently, until all this was presented to me about environmental destruction, the whole business. Still, even with all that, having one would be nice -- it's a very seductive car. It certainly was when we were young and foolish and unable to resist the slightest thing. Now I think more about the cost. The destruction of things.

Could we ever have foreseen at the time of the Industrial Revolution that it all meant Certain Death? I'm convinced that even I in my above average wisdom wouldn't have thought of it. I actually had cars for many years before it ever occurred to me. And even then I needed the talking heads of the mass media -- along with others who are respected, to repeat it every now and again before I realized it.

Had I been there in the Revolution, I'm sure I would have been one of the early adopters -- I'm honest enough to admit it. I would've said, "Three cheers for the Industrial Revolution," even though moths were changing colors and the whole bit. That should've been the 'canary in the mine,' warning us off, but naturally it didn't. We all know the ways of man, lose your head and rush headlong to your own destruction. Other animals basically don't do this, except we think of moths rushing to the flame.

Still, it took a while from the beginning of the Industrial Revolution till the time that we got cars. But what a predictable step it was! Motors, gears, lubrication, internal combustion, and ... exhaust. I hate exhaust. And I'm just as guilty of emitting it, driving as I do, virtually everyday. You can't see it coming out, usually, but there it is, everywhere, killing the world, every one of us. For the sake of a little bit of travel, we've accepted global suicide as a price worth paying.

That we should have left well enough alone and been content riding horses and camels and pulling wagons is now beyond dispute. Alas. Seriously, alas.

With all that in mind, you want to know something popular with the public that absolutely sickens me? Classic cars. What a mistake these are, but people are too blind to see it. They're old, they're still around, they're treasured, restored, and sold for big bucks. How smart! Our pride is placed in what should be seen as a testimony to our impending death! Death to classic cars! Most of them weren't good when they were new.

We know them from parades, driving by slowly, a beauty queen sitting in each convertible. They're old fashioned looking, and you could make the argument that some of them do look cool, like the '57 Chevy. My family had these at the time. I won't deny it. We've all had a part in the environmental destruction. I'd almost like to have a '57 Chevy today, just to make a statement by destroying it. It'd make a great protest that would make news: "Local Man Publicly Destroys Classic Car." I'd sledgehammer that piece of crap till it was nothing but scrap, seriously. Somebody buy me one and see if I don't.

I suppose I've said enough about it. But I have to tell you, I could go on. I also despise car museums. I went to one once and saw some of the very oldest rickety cars, the first ones, back when they had no good idea what a car should look like. They were open carriage and had a stick to steer with. The headlights were candles. For windshield wipers, they had--- Wait, they didn't have windshields. Then we advanced to the more mass produced models, ones we're more familiar with, ones you had to crank to start. You know where you stored the crank? In the crankcase. Crazy how we still use the term.

Today, cars have gone so far that some of them are made particularly with luxury in mind, for the rich. People throw away good money to have one of these idiot cars with all the bells and whistles. Conspicuous consumption. If you're that much a loser and feeling so insecure, get a damned penis pump already. At least you'll be working it in private and the rest of us won't be constantly psychoanalyzing you. Ticks me off.

But what can you do? Rage only gets you so far. It feels good at the moment, like now. My face is flushed, my pores a little more open with the sweat. But what's it worth? The same old world keeps spinning, and cars continue driving by. I can look up right now and see vehicles outside. Big metal cockroaches, and about as healthy.

It's vain -- it really is -- my rage. We're literally killing ourselves, but to speak truth to power is so often a thankless task. We're going to go on our merry way, that's for sure, until, finally, the whole thing breaks down. Then we'll call AAA -- I'm looking way ahead -- and no one's going to answer. Global asphyxiation. Global warming. Gases. Etc.

If we could only turn back time! If we could go back and be content to live more simply, to feed the horse, then stay home, that'd be better. Of course many of us wouldn't even be here, because some of us owe the mobility that came with the automobile to the fact that our parents even met. Or the backseat, where they first did it. Still, if we could make this major world fix, I know it'd be worth it.
Posted by dbkundalini at 3:58 PM