I'm Being Spied On 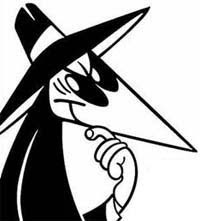 I'm nervous to write here anymore. But I'm going to put at least this one last thing -- call it a cry for help, or whatever. Something to document the straits I find myself in in case something happens to me. If something happens to me, be very aware of this and mark it well, there is a 104-year-old woman who could die without proper care.

The thing is, I'm being spied on, watched, apparently monitored around the clock. I haven't seen the guy and I don't know who he is. But he's out there somewhere, perhaps very close. I know because he's called me and muttered some things in the phone, then hung up. That gravelly, devious voice is etched on my memory.

It's all very devious to do, I think, especially without him stating his motive and plan and what it might take to satisfy him. At this point, I'm barely able to think straight, just being freaked out in several awesome ways. And I don't freak out easily unless circumstances are not calm. I should have just put it out of my mind. Maybe it will be a wrong number. I haven't done anything, seriously that I know of. So why am I being marked out? Is it just a big mistake on someone's part? Or have they set a dragnet, spread one to weed out the guilty from the innocent? Who can know?

The call has appeared two nights in a row, about 10 p.m., a terrible time for the phone to be ringing. I'm tremulous that it will happen again and again, a third night. Then what can I do? In a way I feel that I don't really dare do anything, except show a bright hope that I won't be singled out forever. Maybe he'll get tired of this interesting game and tell himself to quit, or move on to someone more guilty than I. I have done not anything that I know of, yet it's freakish to be accused by someone with authority who claims certain knowledge.

That's what he said, though, and that was the extent of our time. "I know where you go, and I know what you do there." What? Where? What do I do there? How does anyone know? There's nothing to know. But if he could be more specific. Does he want money? A confession? A payoff? For me to come clean? I can't come clean if the charges are clouded. There's a whole veil pulled over the whole situation. Where I go and what I do there is really nobody's business, except those who serve and those who are served. Except if someone makes it his business, which appears to be what's happening, by one with inside information.

Is there a video tape? That's the crux of my fear. If I go to the authorities and he steps forward with video tape, that would ruin me. I could be sent up for life, and marked. I could be made a laughingstock. The best course is to say nothing. And whatever evidence I can find, destroy. Let it all vanish in an instant, swallowed up and forgotten.

I have done nothing. I have no idea what any of this is about.
Posted by dbkundalini at 4:48 PM