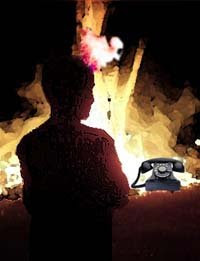 Well, 10 o'clock has come and gone, and no crank call. That's good news.

And surely it's a benefit from The Power of Positive Thinking. Mental power proves itself once again to be transformative!

I doubled down on good thoughts, banishing anxiety. Mentally I arranged a scapegoat to take my fears far into the desert, laying all my griefs upon his sorry hide. I brought my hands together in the classic Praying Hands pose for a time of positive meditation. And as the witching hour of 10 o'clock neared I crossed the fingers of both hands, mentally officiating as the Holy Priest at a sacred marriage (hierosgamos) of feminine and masculine intercessors, one hand as King's X and the other as his queenly consort. Just a little technique I know that occasionally works.

As the seconds ticked down toward 10 o'clock I raced through a positive memory of every good deed I've ever done, calling in karmic favors from every spirit on the block. Helping Grandma with her bathing, helping Grandma with her meals, helping Grandma with dressing, tending her bedsores; you get the idea. Then magic words, sacred syllables of glossalalia I've heard in church. Shondola! Then I went through a list of angelic figures I happen to know from the Pseudepigrapha and Gnostic texts. I was so thorough I even included Eilo the overseer of testicles. And all the way up to Metatron himself! By now my spirit's on fire, and were I even to touch the phone it would certainly zap and render impotent and sterile anyone else on the other end. Too bad he didn't call!

I simply don't believe in being morose or leaving these matters to chance. For me, it's all a matter of rising up in righteous power and indignation. Even as I write this post, my monitor is shorting out and doing a lot of blinking. The power's easier to turn on than turn off. I'm even licking my fingers to try and neutralize some of the sparks but it only helps for a short period. But monitors and keyboards can be easily replaced. I could mow some neighbors' yards and get money to buy this stuff. Or check out the thrift stores and garage sales -- there's lots of good computer bargains to be had, if you're on the lookout. Of course if you have beaucoup bucks -- well, let me move on.

The long and short of this story is that every single one of my efforts paid off! There was no fail! And there was no call! The guy did not call! He did not dare! LOL, ha ha!

"I know where you go, and I know what you do there." [Raising two of my longer sparking fingers in his general direction] Well, here's something else for you to know, Loser, and you also know what you can do with 'em! Sit on 'it!
Posted by dbkundalini at 10:10 PM