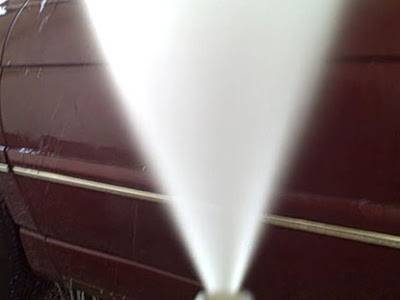 The picture you see is a mystery picture ... a picture that I did not take ... yet which appeared on my cellphone! Read on ...

You may remember the details I gave yesterday on the spewing of Old Faithful. If not, see yesterday.

In short, my cousin and I got the gas jets on, and with the required effort it takes to do it, Old Faithful was revivified. But one detail should not escape you:

I looked at it awestruck for a moment, then fidgeted with the camera and clicked off the picture [posted yesterday]. "I got it! I got it!" That was an historic moment. I paused, awash in emotions and literal water.

Then I heard the phone ring. It was Roto. There was a problem below. The water was massively spilling around him somehow, whether by seepage or a leak. Everything needed to be turned off, and so it was.

How many pictures does it sound like I took? Clearly it suggests one. The picture was taken, I paused, then I heard the phone ring. Roto tells me there's a problem and that everything needed to be turned off, and so it was. Admittedly, it doesn't say I didn't take other pictures. It doesn't exclude the possibility that I could have clicked off several more. Only I'm telling you I didn't!

And yet ... and yet ... this is crazy, I know ... when I checked my cellphone today ... there were two additional pictures ... weird. But to make it even weirder, in the mystery picture above, the intensity of the geyser is quite a bit more pronounced than it was in the first picture. And the angle is different. I don't recall seeing it in this way! That's part of what I can't get over.

How could it have happened? I'm thinking supernatural means. No, no, hear me out! There's a history of strange things happening with cameras and pictures. Strange hoverings of ghosts and demons behind people, or in the foreground of a picture. Deceased relatives suddenly appearing in a family photo. Ectoplasm blotching up a photograph in an unpleasant way. Weird double exposures -- apparently -- but the photographer swears that he only pushed the button once. Swears to it! 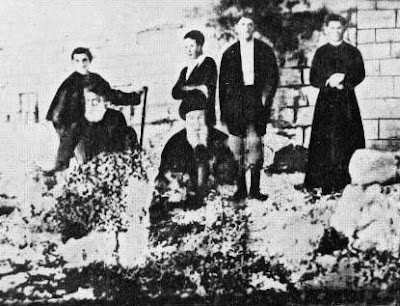 I was just reading a book on Saint Charbel (Sharbel) the other day, the hermit of Lebanon. He lived in the 1800s, basically alone, so there aren't lots of pictures of him. None that I know of. But it's on record that these other people were standing near his old "stomping grounds" and had a photograph made. But look right there in the foreground, seemingly coming up out of the ground or a shrub. That's him! They did not see him in front of them but he was actually there when they checked their cellphone. And as far as I know that's the only photograph of him!

Most people run for cover when they see a camera. This guy wasn't even there and he couldn't manage to keep out of sight! In truth, he wanted the faithful to see his apparition and to debate it forever whether the others Photoshopped him in. They claim they didn't ... and I think they sound sincere.

And just one other example in passing. My late father, who served as a monk, told me the weird story of Lahiri Mahasaya and cameras. A photographer tried to take a picture of the yoga master, but it didn't turn out. Lahiri said, "I am Spirit. Can your camera reflect the omnipresent Invisible?" The answer by implication would be no. Then he said, "Come, then, tomorrow morning. I will pose for you." An author explained the strange result, "This time the sacred figure, not cloaked with mysterious imperceptibility, was sharp on the plate." According to the photographer, though, the previous day Lahiri was having a bad hair day, so apparently any state we can attain short of mahasamadhi still allows for vanity.

All I know, friends, is I did not take the above picture of Old Faithful. It just somehow appeared! You see it and you're amazed, as I confess I'm amazed!

If there are any stories of miraculous healing from gazing at this picture, please send them to me. I'm hoping to honor the photograph by cashing in on it.
Posted by dbkundalini at 5:17 PM